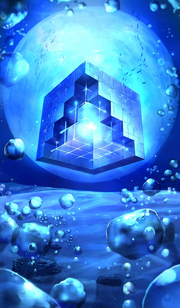 The Moon Cell (ムーンセル, Mūn Seru?), also called the Holy Grail, Eye of God, and Divine Automatic Recording Device, is a massive collection of photonic crystals within the Moon that comprises a giant supercomputer of sorts. It acts as the main setting of Fate/EX.

The existence of the Moon Cell is not known to average humans, and it was only discovered in the 2030s. Other than the existence of the Moon Cell itself, the world of Fate/stay night is said to be exactly the same up until the 1970s.[1] The Moon Cell has nothing to do with Crimson Moon and can be said to be unable to fit within the world of Tsukihime without making the story fall apart, but the Fate/EX-universe equivalent of Crimson Moon, the "Brain of the Planet", should still be living.[2][3]

Unique to the world of Fate/EX, the Moon Cell's photonic crystals are shown to have been created 4.6 billion years before the Age of Man, making it a construct formed roughly 100 million years before even the formation of the Earth. It holds the Moon Cell Automaton (ムーンセル・オートマトン, Mūnseru Ōtomaton?), a large computer-like construct created by an unknown civilization one hundred million years before the existence of the Earth or the Moon. It has recorded everything that has happened on the planet since its formation, and it keeps the records much like Swirl of the Root. It is the oldest known object in the solar system, and it has watched the Earth since its creation. The exact formation of the planets and how the crystals were integrated into the moon is unknown, but scientists know it to be an observation device constructed by an alien civilization of non-human intelligent life.[4]

This great mineral vein is located within an extremely large hole comparable to a several-kilometer-wide crack boring through the moon itself. The diameter of the crystals themselves reaches up to thirty kilometers. It seems that, apart from its surface portions, the moon itself is made up of these photonic crystals. The Moon Cell was discovered by the Western European Conglomerate, who decided to call it the "Holy Grail" because of its reality-changing power. The time of its initial operation is unknown, but an estimate based on radioactive carbon dating approximates the moon to have been formed 4.55 billion years ago, while the photonic crystals were created 4.6 billion years ago.

Photonic crystals are crystals that, on a microscopic level, regularly alternate between layers of high and low refractive index. In this way, it is a substance that can control the transmission of light, making it a valuable material for a quantum computer using light. Humanity has only managed to successfully make photonic crystals a few centimeters in length since intensive study of them began in the twentieth century. The giant photon crystal slumbering beneath the moon can be considered as a supercomputer of enormous size, incredible complexity, and immeasurable processing power that was created from such nanoparticles. Although most supercomputer development was abandoned in the 2010s in favor of shifting the focus to cloud computing, the processing power of the all digital media on Earth combined cannot hope to match the capabilities of the substance. According to Twice H. Pieceman, the Moon Cell's core is made of the purest type of photonic crystal, a material that can act like the crystals used on holography to recording media.[5]

It scans the entire Earth about once per nanosecond and compiles the results of its scan in its database. It is a pseudo-intelligent being that has the supreme ability to affect the outside world with its internal calculations. As an eye that observes the Earth, it acts as a database of human history that faithfully simulates all life on Earth and is capable of providing a definite prediction of the future. It is a processor with a massive memory that has recorded the habits, history, ideas, and even the souls of humanity. As it can also affect the outside world with its calculations, it has the power to "grant wishes." In this way, it can be thought of as a Pandora’s Box that promises the next stage of evolution. It promises god-like power to those intelligent lifeforms who have become technologically advanced enough to scan the interior of the moon.[4]

After it was discovered by the Conglomerate, it managed to hack into every computer system around the world and connect to them within two seconds of contact. This made all Internet security systems moot, as anyone could get into any other computer via the passageways through the Moon Cell as long as they could connect to the Internet. To prevent individuals from reaching the Moon Cell, the Conglomerate prohibited all space travel. In order to determine who is truly worthy of using its power, the Moon Cell began the Holy Grail War, where "spirit hackers" who have hacked themselves into the SE.RA.PH (see below) fight for the right to use the Moon Cell.

The Serial Phantasm, abbreviated SE.RA.PH, also known as The Photonic Abyss and Angelica Cage, is an artificial environment within the Moon Cell located inside of a spiritual computer system called Automaton. The system is similar to Akasha in the terms of holding the "stores and archives" of all human history. It was likely discovered by Harway family, since Leonardo B. Harwey tells about his family has prevented space-travel to prevent anyone from landing on the moon.[6]

The SE.RA.PH is responsible for the summoning of the Servants during Fate/EXTRA. The SE.RA.PH restricts the exit until the tournament participants are reduced to one, as per the Moon Cell's rules. It is also responsible for the existence of the NPCs and all areas in the tournament. The area within it called the "Moon Cell" is a representation of the Moon Cell's core, and the golden globe within the cube is the main core--the core of the Moon Cell itself. Servants generated by the Moon Cell are called to protect the core, even at the cost of violating the contract to their Master. Servants are required to stop their Master should they try to destroy the system, and those who prioritize their Master over the Moon Cell will be deleted from its records. It is, however, possible to fool the Moon Cell's surveillance, enabling Hakuno Kishinami's Servant to protect him/her.

The landscapes generated by SE.RA.PH are all independent Reality Marbles, an extremely powerful feat. The school of the preliminaries, the school for the main tournament, the Arena, and the Coliseum are each individual Reality Marbles. Even the greatest supercomputer on Earth would be unable to sustain a single Reality Marble for any great length of time.

The elevator known as "Elevator to the field of honour" connects to the Coliseum.

Originally the first layer of the seven that make up SERAPH, it has been freed from SERAPH's management and is now administrated by Shinji Matou under certain laws that prevent conflict from occuring. He was later joined by Misao Amari.[7]

Dead Face Julius B. Harwey's floor. A dystopian city where it rains endlessly, the rain being a projection of the anger of Assassin-turned-Berserker, and also said to be a replica of what the stagnated, destroyed cities on earth look like.[8]

A Territory designed after Fuyuki City.

There also exists the Far Side of the Moon (月の裏側, Tsuki no Uragawa?), an imaginary space known as the trash bin that is used for storing malicious information and imaginary numbers. Sealed off as "Not For Use" information, it is a higher dimension where the light within the photon crystals is jumbled. It is the “exterior of the world”, and can be called the "Garden of the Fallen" built from imaginary numbers in contrast to the Near Side being a cell where the "light of heavenly fire" is imprisoned.[9] Due to his power, Gilgamesh is not allowed to appear on the Near Side of the Moon, so he sleeps in the Far Side instead. Nothing else should be able to exist there because it is the territory of nil, and intelligent life forms should not be allowed or be able to exist there. It is not within normal time, allowing for a series of communications over eighteen days from Earth to take less than a microsecond within the timeframe of the Moon Cell.

Due to BB surfacing and gaining power as an Advanced A.I., she begins an extensive reconstruction and periods of resetting to work towards her goals. This allows for someone to contact Gilgamesh even when it should be impossible. The end result of her work is Cursed Cutting Crater, a real space in the present, past, and future. Establishing it as a "place", even Masters can exist there. It is not possible to hack the Moon Cell however much time is spent, but she is able to take control of it by placing herself in “unlimited time” through the power of the primordial goddesses she has taken into herself.[10]

Chapter 7 - I love You.
Observer on Angelica Cage, black bottom moon light.
Crimson Full-Course
No Past.

14,000 years ago, the Umbral Star detected Earth and it's civilizations and sent a fragment of itself, containing Velber 02, which crashed into the Far Side of the Moon, infiltrating the Moon Cell. Velber 02 attacked the Moon Cell, causing huge damage, but was defeated, and was quarantined in an area which became known as the Zero Dark. Using the full power of the reformed Regalia, the darkness in the Zero Dark can be made even deeper, so that the cavern containing the White Titan is sealed away permanently.

Retrieved from "https://typemoon.fandom.com/wiki/Moon_Cell?oldid=190951"
Community content is available under CC-BY-SA unless otherwise noted.