TYPE-MOON Wiki
Register
Don't have an account?
Sign In
Advertisement
in: Characters in Fate/EXTRA, Magi, Servants,
and 26 more
English 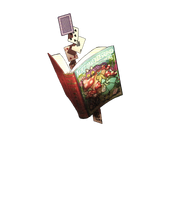 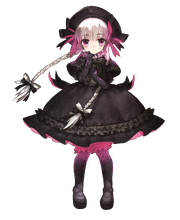 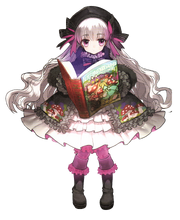 She is one of the Servants of Ritsuka Fujimaru of the Grand Orders conflicts of Fate/Grand Order.

The embodiment of Alice's feelings on the subject projected onto a Reality Marble, Nursery Rhyme, to create a virtual-servant. It is not a hero in the traditional sense, but the general term for any picture book that managed to manifest itself into a corporeal existence. It is a genre deeply loved by the children of England that came into being as a reaction to the half-voiced dreams of the young. It eventually emerged as a Servant who became a champion of the innocent. It formed the foundation for the book Alice in Wonderland, what was perhaps the best known work from the author known as Lewis Carroll, which began as a series of simple rhymes told to the daughters of a family friend while rowing down the River Thames on a warm summer's day.[3][5][6]

Nursery Rhyme is the mirror image of Alice with the same personality, but she truly cares about her Master and doesn't want to lose her. Unlike Alice, she is not shy, only emotionless and bored. She claims that being Alice's Servant makes her happy, and being the Servant of another wouldn't be the same. She feels somewhat guilty about retaining Alice's form in Fate/Grand Order, but after Ritsuka helps her confront those feelings she hopes that through her Alice will experience the happy ending she never received in life.

Nursery Rhyme does not have its own body, and it manifests itself as the will of its current Master. Nursery Rhyme is Alice's identical twin in terms of her appearance; however, her primary colors are black and purple in contrast to Alice's white and blue.

In Fate/Grand Order she retains the same form as she had in Fate/EXTRA, to honor Alice's wish to play with others and to remember her by. Supposedly, the height and weight belong to its human form.[3]

Caster is the enemy that Hakuno's Servants has to face in the third round. She appears when Alice talks about her past history, Caster summon Jabberwock to fight. Hakuno Kishinami and the servant first thought that Jabberwock was the servant and a Berserker class. Throughout the week, they convince Hakuno to "play games" with them, noting two people named Yamada and Suzuki as previous "playmates." In the second floor, Caster unleashed her Reality Marble Nameless Forest against Hakuno and the Servant. As Hakuno managed to catch up to Alice and Caster, Hakuno's existence started to fade while Alice and Caster teleported away. Hakuno successfully broke the reality marble by remembering their name. Caster comforts Alice saying there are other games that they can play with Hakuno.

Touko Aozaki helps analyze Alice's Servant explaining that a Berserker class cannot utilize a Reality Marble and a Caster class is more suitable. As Hakuno look up more details about Jabberwock, Alice pops up and Hakuno asked if Jabberwock is her Servant. Caster interrupts their conversion before Alice reveals anymore details, and Hakuno figured out the true class of this Servant. Alice and Caster both revealed Nursery Rhyme's existence.

In the elevator, Alice claims that she doesn't need Hakuno anymore and Caster is the only person she'll ever needs. As they're about to be deleted, Caster laments for her defeat and clings onto Alice. Caster blames on Hakuno for taking away her happiness with Alice, but Alice accepts that everything has to end someday. Alice thanked Caster and fades away, Caster cries out knowing that she wouldn't be happy without Alice and fades away as well.

Caster appears in Episode 7 to speak with HAKUNO Kishinami. She introduces herself as a Servant named "Alice" and informs HAKUNO of her Master, Alice's, predicament. Caster reveals that her Master was "left behind," but her Master cannot be saved because her Master is already dead.

Caster tries to help her Master by dreaming of a life for Alice, allowing Alice to manifest on the floor. The Alice who appeared to HAKUNO earlier was an illusion. Caster then summarizes that she can no longer help Alice and that the light that can soften the despair of the living is not her, but HAKUNO.

Caster and her Master Alice appear in Chapter 3. Caster is first seen bullying Passionlip and together with Alice, gleefully stuff objects into Passionlip's unique storage space. Passionlip is "saved" from her predicament by Hakuno, leading Caster and Alice to disappear.

By the time of Chapter 6, Caster and Alice have been captured by Meltryllis. Caster is turned into a doll and ripped to pieces, rendering Alice in a comatose state. When Hakuno arrives at Alice's location, Alice uses the last vestiges of her strength to beg Hakuno to rescue Caster.

Hakuno defeats three Jabberwock look-a-likes and acquires the three pieces of Caster's doll form. Hakuno reassembles them and places the doll on Alice's lap. This allows Alice to finally pass on and for Caster to briefly materialize.

After expressing her gratitude toward Hakuno, Caster disappears and rejoins her Master in death.

Caster is one of two Servants Hakuno doesn't fight in the game, the other being the other Caster.

Nursery Rhyme, nicknamed Magical Tome by Henry Jekyll, is a stray Servant summoned likely from the "Demonic Fog" around London in the form of a large book lacking personality. It wanders around the Soho area, attacking civilians and putting them in an eternal slumber. It is actually searching for a Master whose psyche it could use to take a form. Ritsuka, Mash and Mordred are sent by Jekyll to stop the Magical Tome, with Hans Christian Andersen helping them once they arrive. They are initially unable to even damage the Magical Tome, until Andersen reveals its intentions and names it Nursery Rhyme, causing it to take the form of "Alice". She is then defeated by the party.

Feeling alone and confused on Christmas, Nursery Rhyme and Jack the Ripper encounter Gaius Julius Caesar. They mistake him for Santa Claus, but he tells them to wait patiently for the real Santa since he isn’t it. Before leaving Caesar tells them to be good girls and wait patiently until then and that he’ll try to do something for them next year if they can’t do that.

Later, Nursery Rhyme and Jack summon Ritsuka and Santa Alter into their inner world. Santa Alter confirms that she is indeed Santa and asks what they are. They answer they don’t know what they are nor do they have names either. Santa Alter believes they’re the unfulfilled spirits of innocent young girls who died not unaware of love. Nursery Rhyme tells her they want to feel chosen by someone.

Because they didn’t write a letter to Santa, Santa Alter has Nursery Rhyme and Jack fight her to prove they’re worthy of getting presents. They are defeated, however, and despair that there won’t be any Christmas for either of them. To their confusion though, Santa Alter over-dramatically pretends to be defeated by them, and gives a whole plethora of Christmas presents. They thank her for the presents, but Nursery Rhyme asks if it’s okay for them to have so many presents. Santa Alter answers not to worry and says she only has one more stop; she also calls the present the spoils of their victory, not their actual individual presents. She then gives them their presents. Santa Alter begins to leave, but Jack stops her to thank her. Nursery Rhyme thanks them both as the Christmas party was fun despite her initial fear. She then expresses joy that she and Jack were able to meet the real Santa because they waited patiently like the other Santa told them to. They then tell Santa Alter about their encounter with the other Santa.

Nursery Rhyme is amongst the "London" Singularity Servant to aid Chaldea against Demon Gods Pillar.[7]

Nursery Rhyme directly benefits from Paracelsus von Hohenheim's creation of the Choco-Servant because they were created to be guests for her tea parties in the process of achieving his plan to remove chocolate as an ingredient.

Ritsuka and William Shakespeare find Nursery Rhyme in a decorated room having a tea party with Choco-Servants. Shakespeare tries to convince her to return them by saying the female Servants need them to finish making their chocolates. She refuses though because she can't have a tea party any other way. Ritsuka decides to join her tea party to get the chocolate back.

Nursery Rhyme transports them to a field for the tea party. She says they'll all stay until Valentine's Day is over to ensure the chocolate isn't eaten. Shakespeare reminds Ritsuka that the female Servants will be angry if that happens. He also says inevitability always leads to a bad ending, even for Nursery Rhyme. Nursery Rhyme realizes they want to fight and complies.

Even after being defeated, she still refuses to return the Choco-Servants. But Shakespeare tells her she'll get cavities if she keeps eating sweets forever. Even though she's a Servant, Nursery Rhyme has a cavity. Shakespeare attributes this to her eating candy made from a Servant's power, but Nursery Rhyme calls it his imagination. He then has Fergus mac Róich summoned to act the part of a dentist. Nursery Rhyme flees when Fergus gets ready to destroy her "cavities" with Caladbolg.

Nursery Rhyme is not a true Heroic Spirit, but rather, the manifestation of a real picture book. The picture book genre, which is deeply loved in England, has stimulated the dreams of many a child. Nursery Rhyme is essentially a heroic spirit born from children; by children and for children. The Servant Nursery Rhyme is actually a Pseudo-Servant dreamt up by her Master, Alice. She is a Reality Marble that embodies a reflection of her Master’s feelings.[6] She was created with the relic known as "Perpetual Engine - Maiden Empire".

Caster uses physical strikes in battle despite her frail-looking nature.

Caster's abilities are linked to Alice due to their unique nature through Nursery Rhyme. Their main Noble Phantasm is The Queen's Glass Game, and they can create the Jabberwock and Nameless Forest.

Arco Wada is the character designer for Nursery Rhyme.[2] In one of her self-published artbooks Fate/GOMEMO2, she revealed that Nursery Rhyme's dress in later ascensions reflects the motif of the book that she manifests as, using The Little Mermaid as an example of Nursery Rhyme gaining an underwater coral reef pattern.

Kinoko Nasu is the scenario writer for Nursery Rhyme in Fate/Grand Order.[2]