TYPE-MOON Wiki
Register
Don't have an account?
Sign In
Advertisement
in: Servants, Characters in Koha-Ace, Assassin-class Servants,
and 16 more
English 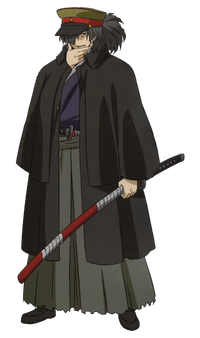 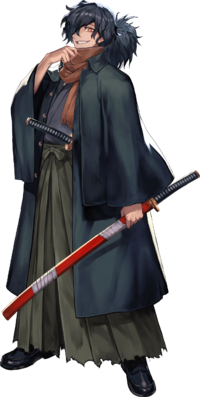 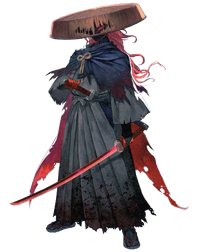 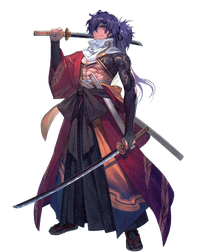 Ryoma, Self-important fellows, Fellows who look down on him.

Okada Izou was of the four great manslayers of the shogunate's closing days, holding the alias of 'Manslayer Izou (人斬り以蔵, Hitokiri Izou?)'. The Onoha Ittou Style, the Kyoushin Meichiri Style, the Jikishi Style and such, he learned various styles of swordplay. Involved with numerous assassinations, he was imprisoned and executed for his crimes.[4]

A young man in his mid-twenties with dark eyes. He wears a large coat.[5]

Yooo This Hakama Is Rad (まっこと格好えい羽織袴?) in Fate/Grand Order, illustrated by lack.

Assassin with Berserker in Fate/type Redline, illustrated by Ryouji Hirano.

Overly boastful of his own abilities, he has a tendency to look down on all other swordsmen, but reputed as 'One with the sword, swift and nimble as a falcon,' his sword arm was the genuine work of a genius.[4] He’s extremely fond of sake and gambling, and has a rough and hasty personality. He looks down on people for his genius with the sword, and hates greatly being made light of.

He doesn’t like using the head and there are occasions in which he depends on the decisions of others, and he tends to obey blindly fellows who make him enthusiastic once. Originally he’s unsophisticated with a chivalrous spirit and has a kind personality, but since he was used as others pleased and abandoned in the end he is twisted.

He intensely detests Ryōma, but that part is like the inversion of a friendship of bygone days. He has a heavy grudge against Ryoma after he betrayed him when he was alive and swore to get revenge on him when they meet again as Servants and kill him.

If you get on with him he surprisingly feels like a nice guy, but perhaps because he’s violent and not smart, he’s the type that is used as people please.

He clearly doesn't like being mocked, or made fun of by others. In Fate/type Redline, when Tsukumo mocks him that any bum can become a Servant, he brutally beat her up for it. He finds sentimental and heart-warming moments disgusting that makes him want to puke. He intends to uses dirty tactics against Servants if it's necessary to throw them off guard.

After he heavily injures Tsukumo, he tells her that her buddies have abandoned her. He notices her breathing is getting lighter and knows she won’t make it. He later tortures Tsukumo by reopening her wounds on the blade of his sword and tells her a outsider won't last long in Holy Grail War alive. He tries persuade her that if she tells him Saber's True Name, he will let her live. When Tsukumo found out his true class and mocks him, he brutality kicks her in the stomach, pulls her side ponytail, and tells her he doesn't like being make fun of and he won't hold back just because she's a woman. When his Master tells him to stop hurting Tsukumo, he tells his Master to shut up and don't give him orders. He pieces her lung after she asks if he was a fan of the real Ryouma when he was alive. Assassin impatiently gives her one last chance to reveal Saber’s True Name or he will end her life. As he was about to finish her off, Saber and her Master arrive just in time to save Tsukumo and he is seen fighting Saber. He recognizes Saber's swordsmanship and calls her a wolf of Mibu. He later offers a deal to Saber’s Master, Kanata if he values Tsukumo’s life. He will let Tsukumo live if he uses one of his Command Seals to make Saber commit suicide. When Tsukumo tries to convince Kanata to abandon her and use the Holy Grail to grant her wish, Assassin pierces her right hand through her right shoulder and she loses consciousness. Suddenly Assassin looks mildly surprised to see Kanata’s body is starting to fade further as he lose most of his left face, arm and leg. He has no idea what’s happening to him, but he doesn’t care as he calls him a loser like his Servant. He demands Kanata to finish his Servant off so it will save him some trouble.

When Saber calls out to Kanata, he stops fading and his body restores itself somehow. Kanata calmly asks him how to use the Command Seals. Assassin is incredulous that he became a Master if he is so ignorant, but explains. Kanata suddenly hurls his smartphone at him and uses his magecraft to make it float in the air. Having never seen a smartphone before, Assassin mistakes it for a Mystic Code and is wary of it since it is floating. Kanata uses the distraction to spend a Command Seal to order Saber to kill him. Saber attacks him and he is shocked when he starts getting pushed back. Enraged by Kanata’s sneaking tactics, he threatens him that he won’t give him a painless death. He is impressed by Saber’s strength when boosted by a Command Seal. He later gets disgusted by Saber and Kanata’s sentimental conversation and threatens Saber that he can behead her Master before she reaches him and she asks him to care to try it. Assassin and Saber continue their fight fiercely. He attempts to uses dirty tactics by throwing a couch at her, but she slices it into pieces. He later tries to pull out his second sword and attempts to throw it at Kanata’s head, but Saber deflects it. As Saber about to attack him, Assassin imitates Saber’s flash step techniques and slashes her back. After Kanata reveals Assassin’s title and abilities to Saber, he gets angry and says he going to show them something very different as the real Manslayer as he prepares to unleash his Noble Phantasm.

He rushes at her and delivers a heavy slash. She partially blocks it with her hilt and takes a slash on her arm, but she manages to slice off some of his fingers. He starts thrashing and freaking out about his injury, causing Saber to call him out as a hypocrite as he had mocked Tsukumo when he took her fingers. Saber knocks him out the window and pursues him. As he struggles to fight back, he asks himself just what is Saber because she does not react to her injuries and he cannot sense any emotions from her as if she were an empty husk. He orders his Master to use a Command Spell to give him the strength to kill Saber, but instead, she uses it to order him to retreat. As he disappears, he swears he will kill Saber next time.

After Assassin recovers from his injuries from his last battle against Saber, he is first seen slitting an unnamed Japanese commander's throat and kills him instantly in the middle of the night. He is later seen with his Master having a conversation with Major Magatsu.

After his Master and Major Magatsu's conversation, Assassin stole a bottle of alcohol from his Master, felt offend and correct her not to call him by his class in private. She asks him if he is still mad about what happen his fight with Saber, he took out his anger by kicking a bench and yells at her that if he could his fight with Saber kept going, he could had won. When she taunt him about he could kill her as long he doesn't mind going down a useless fool who can't follow orders, still enraged, he decides not to kill her since if he did, he will lose his chance of winning the Holy Grail War.

He is later seen recalls from yesterday and his Master until Caster come to check up on him. Annoyed to see Caster, he remind him that his Master already report to him. He wonders if Caster is curious about Tsukumo and complains about her being annoying. However, Caster wasn't talking about her, he is actually talking about Saber's Master. He explains to him about how he is weird and his body keeps turning transparent, and the things he threw at him kept floating around. He doesn't know about him much and asks Caster why is he curious about Saber's Master and replies that he took an interest in him and he will appreciate if he tells him more about him.

Okada Izou was born with fearsome natural talents that caused him to be released in the Bakumatsu society as a matchless hitokiri. Extolled as an expert of divine punishment, Izou could be described as a prominent Assassin in Japanese history that was involved in many assassination cases, but that also prevented his accomplishment as a swordsman. Due the trends of the times or maybe even fate, Izou was a rare genius of the sword that was unable to polish his talent and let it bloom exactly because he was a genius. In Japanese history, the Bakumatsu is regarded as the era in which the deed of "cutting people with a blade" was performed the most. As a "hitokiri" who represents said era, the sword skill of Izou is comparable to the Saber Class despite him being an Assassin.[2][4]

He has a tendency to act arrogant about his own skill and to look down on others, but his skill is truly that of a genius.[6] Rather than a master fencer he’s a hitokiri by the book, the type that doesn’t dislike despicable actions if they are for the sake of winning.[2][4] He utilizes a fighting style specialized in killing his enemies practically, and is the kind to not hesitate about using underhanded means of victory.[6]

Okada Izou's Noble Phantasm is Settlement Sword. During Fate/type Redline, he uses this to copy Okita Souji's flash step techniques against her.