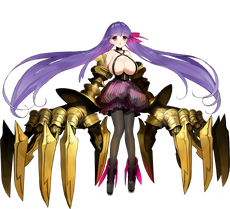 The Far Side of the Moon[4]

Presence Concealment
A+[1][5]
Masochistic Constitution
A[1][5]

Passionlip (パッションリップ, Passhonrippu?) is an Alter Ego-class High-Servant of BB in the CCC Incidents of Fate/EXTRA CCC and Fate/EXTRA CCC Fox Tail. She is one of the Servants of Ritsuka Fujimaru of the Grand Orders conflicts of Fate/Grand Order.

Alter Ego M (アルターエゴ M, Arutā Ego M?), whose True Name is Passionlip, was created by BB as a Heroic Spirit-Complex. Classified as a High-Servant, she was created from BB accessing the Moon Cell's Servant Archive and selecting goddesses compatible with the Ego from inside of it. BB reproduced the data of the goddesses, comprising them into Passionlip as a Composite Divinity (複合神性, Fukugō Shinsei?).[5]

The first component of Passionlip is Parvati (パールヴァティー, Pāruvatī?), the goddess of beauty from Hindu mythology. She is a fertility goddess who loves her husband, the god of destruction Shiva, with blind devotion.[5]

The second component of Passionlip is Durga (ドゥルガー, Durugā?), the goddess of war, considered to be a facet of Parvati. She possesses ten divine weapons, and Passionlip's gigantic nails are the incarnation of these ten blades.[5]

The third component of Passionlip is Brynhildr (ブリュンヒルデ, Buryunhirude?, Brunhild), a goddess of war from Scandinavia. Unable to be tied to the hero she loved, this queen called destruction to her though her grief. In Wagner's opera, she was rendered as Brünnhilde, who appears as a valkyrie who escorts the souls of the departed to Valhalla. It goes without saying that the circumstances of this work led to a tragedy where she despaired over love and raised her hands against her beloved.[5]

Like Sakura Matou and BB, Passionlip has long flowing violet hair (depicted with pink tint in artwork) and wear a pink ribbon on the left side of her head. Her attire consists of neck belt, two strips of belt covering her large breasts, and three more over her torso. She also wears what appears to be a striped bloomer with brown panty hose and a pair of high heel shoes. Passionlip has had part of her arms turned into gigantic talons, representing the swords of Goddess Durga. She also appears to wear a lipstick. She wears cute pink underwear.[4] In Fate:Grand Order, Passionlip now wears a blouse and catsuit that cover her chest, and switches to wear flowing white dress with pink sashed skirt in her final ascensions.

Passionlip is the Alter Ego of "the end of love and hate", born out of BB's ego "desire to court" and "hate and love."

She will initially be friendly to Hakuno Kishinami, but orders from her "mother" will force her to attack them. Like Caster and Saber, she will fall in love with them despite their gender.

She doesn't like being touched. In her free time, she practices cooking.[4]

Meltryllis and Passionlip invaded the school and Gawain fought back and things seems at a disadvantage for him. Karna later appears and allies with Gawain to take both Alter Ego. As Passionlip was cut down, Passionlip and Meltryllis combined an attack called "Virgin Laser - Palladion".

In Type-Moon's April Fools' Day 2015, she part of the Imperial Roma talent agency.

Passionlip suffers from a Perception Disorder, where she cannot perceive the actual shape of both her hands. Her "mind" causes her eyes to avert her ugly form, leading it to translate her hands as those of a normal girl. She could only see her claws as "something normal". Once, Passionlip could not understand "why was she feared", but now she has started to properly face her body by the time of Fate/Grand Order, accepting her monstrous nature.[2]

She has an excellent rank in Presence Concealment, normally a base ability of the Assassin class, that was acquired due to her personality. Her cowardice and prudence make it possible, allowing her to have stalked Hakuno Kishinami from early within the story. She was able to watch over them from an unseen location, among other things, without anybody noticing. The main problem is that her gigantic nails get in the way, leading to her becoming discovered and keeping her from becoming an excellent stalker. Her Noble Phantasm is Brynhildr Romantia and Virgin Laser - Palladion.

Her Quality as a Target of Abuse increases the chances of her being targeted by an enemy during group battles. Though it is normally a Minus Skill. it works for a Servant with a strong defense like her, allowing her to function as an excellent escort and grants some pluses to defensive values. Her A rank also comes with the special effect of causing the attacking side's composure to break the more they assail her, eventually reaching the point of no longer being able to think of anything but the owner of the skill.

She has the ability Trash & Crash, a specialty skill that the Alter Egos naturally possess. It is a Cheat Skill referred to as "id_es" that evolved from Monstrous Strength. It allows for anything, no matter how much of a gigantic capacity it may have, to be crushed and compressed by her nails as long as it is "something that can be enveloped by hand." It is not limited to something that can fit in her hands, but everything in her line of sight will be treated as a target as long as it "is settled in her hands." Even if the target is a gigantic Mega Structure like an Arena, the conditions for compressing it will be fulfilled if there is a place that she can get an unbroken view of the Arena.

She is able to compress her line of sight by holding her hands out towards the target Arena in the distance, gaining a small unbroken view of it. Once the whole figure of the Arena is completely settled in her hand, she will recognize it as having grasped it, making compression possible. Such planar physical interference disregards perspective, but the compressions still takes time if the target is large. Compressed objects become a cube five centimeters on all sides, but the mass of the cube can only be reduced to one tenth of the original object's weight. The compressed objects are treated as dust data, allowing them to be stored within her Breast Valley (ブレストバレー, Buresuto Barē?), a simple trash box with the function of harvesting unnecessary data files and storing them.

It functions as well as a garbage can, and the icon is configured in the middle of her breasts for some reason. It is an imaginary number space pocket that stashes away as much trash as one likes, allowing her to harvest anything as long as it is dust data in any capacity infinitely. Though it is contradictory, that which exceeds her own memory volume can be thrown away in this valley. While it seems like a convenient function, it is truly a meaningless function because dust data cannot return to its original shape. She gained this special structure because she is the type of girl-figure that stashes away her emotions inside and self-mutilates.[5]

Retrieved from "https://typemoon.fandom.com/wiki/Passionlip?oldid=162603"
Community content is available under CC-BY-SA unless otherwise noted.