Although Rider is a copy of Leonardo da Vinci (レオナルド・ダ・ヴィンチ, Reonarudo da Vinchi?), her Profile lists her True Name as "Gran Cavallo". She is a backup body created by her Caster self as a means to inherit her memories and pilot the Shadow Border in the case of her death.

While a male normally, da Vinci says that the Mona Lisa represented the ideal beauty she pursued during her life, so she feels nothing wrong in having become that beauty itself. 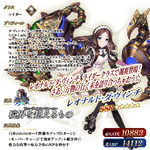 Rider in Fate/Grand Order Arcade.
Add a photo to this gallery

Retrieved from "https://typemoon.fandom.com/wiki/Rider_(Fate/Grand_Order_Arcade)?oldid=142722"
Community content is available under CC-BY-SA unless otherwise noted.