Start a Wiki
watch 01:55
Who is the Rider of Black?
Do you like this video? 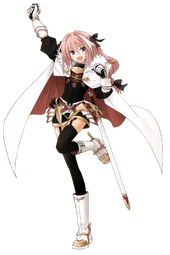 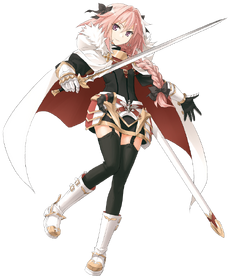 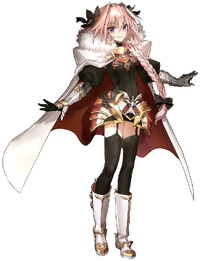 Rider of "Black" ("黒"のライダー, "Kuro" no Raidā?) is the Rider-class Servant of Celenike Icecolle Yggdmillennia of the Black Faction in the Great Holy Grail War of Fate/Apocrypha. After the death of Celenike, he forms a contract with Sieg.

He is one of the Servants of Ritsuka Fujimaru of the Grand Order conflicts of Fate/Grand Order.

Rider's True Name is Astolfo (アストルフォ, Asutorufo?), one of the Twelve Paladins of Charlemagne (シャルルマーニュ十二勇士, Sharurumānyu Jūni Yūshi?). In the Charlemagne Legend, he is the son of an English king, and one of Charlemagne's twelve faithful Paladins. Among the Twelve Paladins of Charlemagne, Astolfo is said to be the most handsome, eternally optimistic, and completely lacking in sense. As the legends go, Astolfo was quite the ladies' man.[1][6] As a cousin of Roland, Astolfo is included among those twelve—that being said, Astolfo was famed as "weak" in legends.[4]

Astolfo has created many legends as he was an adventurer who flew to all over the world and even reached the Moon in the end. Through his journeys, he had won numerous Mystic Codes such as his flute, his grimoire, and his shining golden lance. Astolfo brought rise to various legends on the back of mounts like a griffin and the famous Rabicano, but particularly famous among them is something inconceivable for this world—the Hippogriff.

Although many are the glorious tales of Astolfo, it is said that he has made just as many mistakes. He was continually defeated in riding tournaments, fell victim to many thaumaturgical traps and even lost—in a matter of hours—the reason that he had picked up at the moon. However, Astolfo never faltered; he did not seem to consider failure or defeat as blunders in the first place.

Rider is an androgynous-looking boy who is fancily dressed. Beautiful beyond all compare, he states that his hair ornaments, which seem like something a princess would wear, are an "irresistible proof of friendship" that he uses to restore peace to his depressively mad boon ally, Roland.[1] His appearance is contrary to the legend of being said to be the most handsome among the Twelve Peers of Charlemagne, and though extremely unexpected, it is natural for legends to become distorted. He purposefully dresses "as a girl" because he likes cute things.[7] His gender in the servant status was written "le Secret♪".

Rider is known in his legend for being eternally optimistic and completely lacking in sense, and he can be called "curiosity in human form." As a Servant more concerned with the current prospect of a second life over all else, he is one who will, with or without permission from his Master, instantly leave when not in conflict to indulge in the pleasures of the world. He greatly enjoys physical form rather than the usual practice of being kept in spirit form except for battle, and obtaining permission to do so is enough to cause him to dance for joy. He is a frightfully unparalleled blabbermouth, prone to speaking on and on until those involved lose all rationality. His conversations, through no ill intent on his part, have a way of meandering toward maximum social awkwardness. His hobby of adventuring gets himself mixed up in an assorted amount of mischief due to him constantly popping up everywhere.[1] Since he has no wish in special to entrust the Holy Grail, this Servant's motivation greatly fluctuates depending on whether or not he likes his Master. The type who is frankly straight with the person he came to like, regardless of said person being of the opposite or the same sex.[4]

Rider leaves all hard decisions as a matter for his heart to decide on the spot, following the course he deems most fit. He does as he pleases without regret, and such obviousness of course would be hard to fathom from anyone other than him. He decides to save Sieg entirely on such a pretense, and not knowing how far he will be able to help, simply states "I'll keep helping him until I stop."

Sieg
Rider took it upon himself to help Sieg when they first met simply because he wanted to. He promised to look after Sieg until he had been wholly satisfied, even after being told that Sieg would live for three years due to being a homunculus. Rider would later help Sieg escape from the Yggdmillennia despite knowing the retribution he would receive from the rest of the Black Fact for this treacherous act. He is able to inspire Sieg to continue living even when the latter thought it to be pointless.
Celenike Icecolle Yggdmillennia
Roland
Jeanne d'Arc
Siegfried

Rider is summoned by Celenike Icecolle Yggdmillennia with a glass bottle containing stains left by some kind of liquid as a catalyst in a multiple Servant summoning. When first summoned, he is the only one to show a wide, smiling face at the Masters. He is quick to introduce himself to the other Servants, forgetting all tact in instantly revealing his name without permission and subsequently being rebuked for using Archer's true name rather than his class name. After the gathered Masters and Servants begin to leave, he is extremely pleased when his Master offers to give him a tour of the castle. She reveals that she will not force him to go into spirit form to conserve energy and even prepare him a room. Upon leaving for the town despite his Master's strict control, he uses a plain outfit designed for the homunculi to keep from drawing attention.

Soon after Kairi Sisigou and Saber of Red fight several of Caster of Black's golems, a homunculus escapes from the magical energy storage tanks before he can be used as research material. As the homunculus desperately tries to escape, Rider comes upon him, concerned about his state and determined to help him in some manner. As the homunculus inaudibly murmurs for help and faints from exhaustion, Rider begins by wrapping the homunculus in his cloak and carrying him to safety. Rider avoids his own room due to his Master calling on him constantly, and he runs into two homunculi searching for the escapee on Caster's orders. Rider denies having seen him, and he contemplates on who he could confide in about the situation. Discounting Saber, Lancer, and Berserker, he decides upon Archer. As Archer picks up on the circumstances instantly, he uses his medical knowledge to examine the homunculus.

Archer informs Rider that the homunculus cannot live a normal life, giving him three years to live at most in his state. Rider becomes depressed at the news, and Archer inquires as to why he saved the homunculus. He is able to answer instantly that it was simply because it was what he wished to do, and he leaves the question as to what do about Caster pursing the homunculus up in the air. Archer loans him the room for the time being, and before leaving, asks Rider if he will see the task of caring for the homunculus until the end. Noting how weak and helpless the homunculus appears, he cannot believe he would be able to escape on his own or survive even if he did escape. Although Rider will disappear far before three years, he plans on protecting and helping the homunculus until he feels it is acceptable.

He nudges the already awake homunculus up, and attempts to start a conversation that is only met by a timid silence. In an attempt to calm him, he gently hugs the homunculus to his chest while telling him that he is there to help him obtain his wish. As the homunculus comes to ask for Rider to save him, Rider answers instantly, responding to the doubting look of the homunculus with a carefree smile. Rider promises to save him no matter the obstacle as a Heroic Spirit, telling him to leave all planning to he who lacks restrain more than anyone else.

Santa Alter for Roughly a Week

Confronting Santa Alter on Hippogriff when she came in response to Marie Antoinette's letter, Astolfo tells Marie to fire at her. Later, he goes to join the fight against Santa Alter with Marie and Chevalier d'Eon, but the fight is already over by the time he lands. He is later asked by Santa Alter about d'Eon cross-dressing, which he answers that people should wear the clothes. Astolfo then responds to d'Eon's insult that he's a pervert along Roland by saying that Roland is into sadomasochism while he is more into scandals. After Marie and d'Eon retrieve their presents, he becomes excited at getting one, but Santa Alter flies off refusing to give him one since he didn't help out at Orleans. Then while he attempts to excuse his absence, he is hit by a Halloween pumpkin that Santa Alter threw at him. He then wonders if she is calling him cute by giving him a pumpkin, but when Marie teases him that it means that he won't reappear until next year's Halloween.[8]

When the Agartha Singularity manifested, Astolfo secretly accompanied Ritsuka Fujimaru through the Rayshift along with Chevalier d'Eon.[9]

In Type-Moon's April Fools' Day 2015, Astolfo is an artist in the Imperial Roma talent agency. He debuted in the 30th December 2012. His class is Male girl Idol (男の娘アイドル, Otokonoko Aidoru?) and he is from England. His Tmitter user account is @tmtt15_astolfo.

Rider does not possess formidable parameters, instead relying on his powerful Noble Phantasms much like a typical Rider-class Servant. Without them and considering his attributes and skills with weapons, his power as a Heroic Spirit is considered somewhere between second-rate and third-rate, being the only one of Charlemagne's Paladins who had a legend portraying him as 'weak'.

Rider's main weapons are a sword and chain mail. His Noble Phantasms include La Black Luna, Trap of Argalia, Hippogriff, and Casa Di Logistilla. Unlike many other Servants, he is a Heroic Spirit whose true name does not bring about any inherent weaknesses if it is exposed.

Rider has a slender sword hanging along his waist, though it is not a Noble Phantasm, its sharpness was incomparable with commonplace weapons held by other rank-and-file soldiers. However he doesn't use his sword much so he gave the sword to Sieg. To Sieg, the steel blade felt heavy in his hands.

In Fate/Apocrypha, Rider received the divine shield Akhilleus Kosmos from Rider of Red. However, due to not being the true owner, Rider cannot use Achilles' method of attack with the shield.

Rider was designed by Meteo Hoshizora together with Ototsugu Konoe for the original canceled online game project.[1][3]

Yuuichirou Higashide said how scary it was that he ended up no longer knowing what his gender is while he's writing Fate/Apocrypha.[7]

Konoe said he became a wonderful character who follows his own path in a refreshing way while ignoring the established framework.[7]

Retrieved from "https://typemoon.fandom.com/wiki/Rider_of_Black?oldid=149477"
Community content is available under CC-BY-SA unless otherwise noted.