Also known as Orlando (オルランド, Orurando?), Roland is the paladin leader of the Twelve Paladins of Charlemagne.[2][3] He’s a young, pious hero who gained popularity through the Song of RolandWP and Orlando FuriosoWP.[1] Recognized as one of the most popular and renowned of the Paladins, he is famed for being the wielder of Durandal that he received from Charlemagne. The sword appeared in various other legends revolving around Charlemagne, and it eventually became a symbol of Roland's bravery.[4][2][5] However, he’s a bit weak in regards to romance, and acts out in madness when rejected.[1]

He holds the monstrous strength to tear a man apart with his bare hands, and his skin is said to be as tough as diamond. In addition to other things, he was brave enough to smash an orc terrorizing the seaside with an anchor. However, when he abandons his mission halfway and chases after a beautiful woman named Angelica, it’s a bit disappointing to watch. Nonetheless, up to this point, he falls within the category of ‘valiant paladin’.[1]

Roland was said to have fallen in love with the beautiful queen AngelicaWP, but she rejected the idea of falling in love and eloping with a "mere soldier" out of her pride. This caused Roland to go mad, throwing off all his clothes and rampaging around while nude.[5] During his rampage, Astolfo and the other Paladins worked hard to capture him.[5] Astolfo notably dressed as a woman during the episode, wearing such clothing to calm and appease Roland.[6] He says the hair ornaments worn during that period are an "irresistible proof of friendship" between the two.[3] Astolfo eventually brought him a bottle of reason from the moon and restored his sanity.[5]

Roland was trapped by the resentment of his stepfather GanelonWP. Although he and other Twelve Paladins of Charlemagne fought hard, the enemy army was 400,000 strong against 20,000 of their own troops. Heroes fell one after another in the face of overwhelming numbers.[1] When Roland was on the verge of death, he made an attempt to break Durandal to keep it from falling into enemy hands, but its indestructible nature did not allow for that.[4] Roland wouldn’t blow the horn to call for reinforcements until the very end. OliverWP blamed him for getting lost during a life-or-death situation, and when he asked if Roland wanted to prove the superiority of his heroism, Roland responded:[1]

“―――It’s a stupid reason. No matter how much I want to, I just can’t blow it. I still can’t believe the betrayal of the man who called himself my father.”[1]

This ridiculous, good-natured man, who had experience tragic love and knew how to harbor harsh resentment, could never get used to being betrayed by someone he believed in.[1]

When he and everyone else was on the verge of defeat, he held his horn high and blew with regret. His body covered with blood, blowing so hard that his brains were spilling out, he fought for a little longer before perishing. Convincing himself that this horn would bring about the death of his stepfather―――[1]

The message of the horn that Roland blew with his dying breath arrived, and Charlemagne arrived with reinforcements, but they hadn’t been able to reach the Twelve Paladins in time, and it’s said that most of them died in the battle.[1]

“99kg is the weight when I take everything off, obviously. A precise number must eliminate the weight of underwear.”[1] 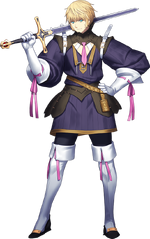 Roland is thought by others to be a pervert along with Astolfo, but Astolfo describes him as being "into kinky stuff like handcuffs" in comparison to himself who enjoys being part of a scandal.[7]

Strong and unyielding. Noble with a refreshing smile. A noble paladin with no interest in wealth, abiding under the love and honor of God. He will respond civilly to civility, even if it comes from an opponent, and rudeness will be met with trembling rage. He’s a hot-blooded man who will stand and shout at any unjust situation.[1]

…But sometimes his love-life tends to drive him mad, and he gets naked on occasion. Outside of that, he’s an amazing knight. Except for the nudity thing, really.[1]

He holds a very moderate attitude towards his Master. Be cordial, regardless of one’s gender. Due to his piety, he’s actually quite easy to handle as a Servant. Unless the Master is cruel, he’ll fight alongside you and win you the Holy Grail.[1]

Naturally, he has a few weaknesses. Most notably would be his inability to resist temptation. Roland can only pray that a beautiful, knock-out woman doesn’t get involved during the Holy Grail War. And of course, it would always happen at the worst possible time for Roland.[1]

While Waiting for Roland[]

In Astolfo's Interlude, he forces Ritsuka Fujimaru to accompany him to the Orleans Singularity under the assumption that Roland would eventually be summoned if they just wander around looking for him. While spending some time being lost and carefree about it, Astolfo tells Ritsuka and Mash (who is serving as navigator) a little more about his cousin after denying that they are romantically involved, specifically about how Roland came to enjoy stripping and running around naked.

Eventually, they come across a castle, where Astolfo questions one of the soldiers about whether they had seen a "naked handsome man". Evidently traumatised by Roland's naked rampage, the castle's soldiers attack under the belief that they are Roland's friends. After subduing them, Astolfo and Ritsuka move on to a town where the process repeats itself, with the town's citizens being so appalled that they appear zombie-like.

They track Roland to the wastelands, and Astolfo manages to successfully locate him with his detailed if illogical reasoning. Thankfully, Roland appears to them clothed, and seems reasonable enough until he is introduced to Mash. When she rejects his advances, Roland descends into a rampage yet again and loses his form, revealing that he is actually a figment of Roland's emotions that were left in France rather than the real deal. The figment laments that it wanted to "bare it all" upon defeat, causing Astolfo to burst into laughter and proudly acknowledge that he would like to fight again with Roland and their king, Charlemagne.

In the Fate/Apocrypha manga adaptation, he appears in Sieg's shared dream of Astolfo's past, which depicts the Orlando FuriosoWP.[8]

A Servant that’s analyzed to be a surefire win during a Holy Grail War unless something goes awry. His Parameters, Skills, and Noble Phantasms lack any discernable gaps, making it incredibly difficult to defeat him through legitimate means. He holds the Monstrous Strength to tear a man apart with his bare hands, and his skin is said to be as tough as diamond.[1]

Naturally, he has a few weaknesses. Most notably would be his inability to resist temptation. Roland can only pray that a beautiful, knock-out woman doesn’t get involved during the Holy Grail War. And of course, it would always happen at the worst possible time for Roland.[1]

Roland's main Noble Phantasms is Durandal. It is said to be unbreakable and invincible, and is often compared to Excalibur as an Immortal and indestructible holy sword. The golden pommel contains many rare relics that did not exist in the Hector’s time, and due to their influence, it is extremely effective as a conceptual weapon.[1] In terms of pure destructive ability, it’s comparable to a blow from Charlemagne’s Joyeuse Ordre. However, as Charlemagne is originally a king, not a knight, he’d be defeated in a head-on collision with someone like Roland.[9]

Roland's second Noble Phantasm is Roncevaux Olifant. It can be used to cause a break the situation by blowing on it. In a sense, it is similar to the miracle powers possessed by the holy sword Durandal. The louder you blow, the easier it is to stop the situation, but also the more damage it does to Roland.[1]

Roland was first mentioned in Fate/stay night, where Durandal was one of the weapons inside Gate of Babylon.

Roland was first introduced in the Fate/Grand Order Interlude While Waiting for Roland in 2017. He was implemented in the game as a playable Servant in 2022. Roland's model had been done and had been ready to implement for five years but the writers couldn't find a good time to introduce him until Traum.[10]

Mineji Sakamoto is the character designer for Roland.