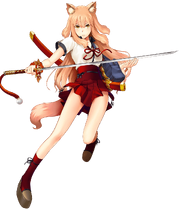 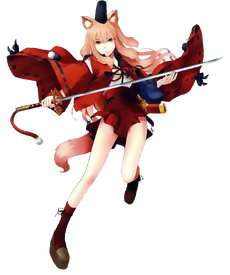 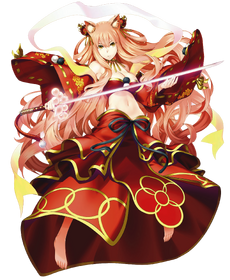 Saber (セイバー, Seibā?) is a Saber-class Servant introduced in Fate/Extra CCC Fox Tail as a rival against Caster and the Servant of Kazuhito Sakagami. She appears as Dan Blackmore and Robin Hood's opponent in the Moon Holy Grail War of Fate/Extra Last Encore.

She is one of the Servants of Ritsuka Fujimaru of the Grand Order conflicts of Fate/Grand Order.

Saber's True Name is Suzuka Gozen (鈴鹿御前, Suzuka Gozen?), a dancing princess who made her stronghold on Mount Suzuka during the Heian period. Together with Sakanoue no Tamuramaro, she engaged in Oni extermination.[1] Regarding her in literature, she is known as a thief, an Oni, and/or a celestial maiden, but all of them share a common legend that she also go by the name of Tate Eboshi (立鳥帽子, Tate Eboshi?).[2]

In the Heian era, she is said to possess supernatural powers and worked for the wolf clan in Mount Suzuka.[2] A peerless, beautiful lady whose brilliance and strength had her celebrated as a celestial maiden, or maybe an Oni. Her true identity is the beloved daughter of the Demon King of the Fourth Heaven dispatched from the heavens.[1]

Receiving the order to turn Japan into an evil country when she descended from the heavens, Suzuka Gozen was however, satisfied with merely stirring confusion in the human's world by her own hands.[1]

Although she claims to sent "invitations" to team up with Otakemaru and conquer Japan together, her letters were ignored. In reality, she demands him to be her retainer and conquer Japan for her. She got irritated by the repeated disrespect, so she orders him to appear before her and threatens to kill him because he is evil to refuse her orders.[2]

When she thought Otakemaru has appeared, she had fallen in love at first sight. As they fought, it turned out the man was Sakanoue no Tamuramaro, who won the duel when he revealed his name. Suzuka Gozen lost due to being too surprised and frozed in the fight.[2] After numerous adventures, at the end of a tragic love, she was defeated by her lover Sakanoue no Tamuramaro.[1] They both thought it was unfair so they re-arranged the match for another time. They lived together for a time and Sakanoue no Tamuramaro fell in love with her.[2]

She went to subjugate Oni demons alongside Sakanoue no Tamuramaro. They both defeated Akuji no Takamaru. Some time later, she pretended to be Otakemaru's wife so she could soften his thick skin with her powers. After three years, they finally killed him.[2]

She reached the end of her life at the age of twenty six. Sakanoue no Tamuramaro went to the underworld to negotiate to bring her back. In the end, she was resurrected and they had a happy ending together.[2]

Saber looks similar to Caster, and she has the ability to alter her appearance to that of a normal human. She appears to be wearing a Shirabyōshi attire from the Heian period; she has a black tate-eboshi hat, Red hakama and a red suikan. Her clothing appears to be Shinto inspired but she dresses herself in a modern student uniform. In addition, she carries a student bag fashioned with badges and straps. She appears to follow ancient Japanese custom to not wear underwear under her skirt. 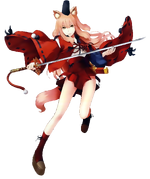 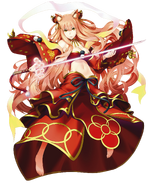 Selfish and impulsive, a talented girl who "seriously" acts as a JK (Joshi Kōsei, meaning girlish high school student). Originally, her personality is the opposite of a JK, a dignified, prudent princess who can follow the conversation. Although she is cruel as the Tenma's Princess, she is very dedicated to her role and duties; thus, she has a strong sense of pride.[1]

... On the other hand, that dedication and wisdom is also the cause for the treacherous alignment of an "Oni's daughter", which leads her to be depressed, rather self-poisoning, and having a tendency to harbor negativity. An ennui-like class representative gifted with wit and beauty, but also holding some darkness, is probably what can be said of her, and it is thanks to her JK acting that the negative parts of her personality can be somewhat hidden.[1]

Truly a tragic celestial maiden but, pursuing beauty and settling on beauty, she reached the most forefront style——————"Well, it's gotta be JK! Shrine maiden is fine too, but if it's for falling in love, then it has to be a high school girl! There isn't anything else that feels fitting!"[1]

She refers to her Master as her boyfriend and "Kazu-kun" (カズくん?).

Suzuka and her Master are shown defeating Archer and Dan Blackmore. After their defeat, Dan praises Suzuka's Master, offering him some final advice, before he disappears with his Servant.

Saber possesses the ability to alter her body, allowing her to alter her normal appearance to hide her ears and tail and also take on an appearance similar to BB and Sakura. She has an ability to charm others through her Mystic Eyes. She possesses three Japanese swords of different designs, and wields all three at once in battle. One sword is used for direct combat, while the two other float around her and attack at command. The one she wields in her right hand is a regular sword with a pommel and single tassel with an orb, Kenmyouren. The sword floating to her left is completely silver sword with a single tassel, Shoutouren. The sword floating to her right is a completely golden sword with two tail-like tassels, Daitsuuren.

She can use them in a number of ways, either fighting with all three swords up close to try to overwhelm the opponent, use the floating swords as long range weapons to distract the opponent and then rush in for a close range attack with the third, or bring all three swords in front of her to block an attack. The golden sword can be launched at an opponent with enough power to gouge a large hole in their chest. Her first Noble Phantasm, Heavenly Demon Rain, uses the golden sword and a small ornate hairpin with the same tassels that float into the air and produce numerous copies of the sword. Her second Noble Phantasm is her silver sword, Blessing of Wisdom.

Saber was cut from the development of Fate/Extra CCC. Takashi Takeuchi wished to finish the design, and she was placed into the manga as a character.[4]

Retrieved from "https://typemoon.fandom.com/wiki/Saber_(Fate/Extra_CCC_Fox_Tail)?oldid=139303"
Community content is available under CC-BY-SA unless otherwise noted.