B
B
B
"While her Luck stat is originally C, taking into account that she met a person like the Old Man even while suffering from misfortune, its rank must be higher than that - or so the person in question believes. And so, that's how it turned out."

Saber's True Name is Shita-kiri Suzume no Benienma (舌切り雀の紅閻魔, Tongue-Cut Sparrow Benienma?). A young swordsgirl bearing the title of the famous "Shitakiri-Suzume (Tongue-Cut Sparrow)" from Japanese folklore, and diligent owner of Enma-tei. She appears in folk legend as "a creature who helps people in the mountains." This is also how she is portrayed originally in Uji Shūi Monogatari, a collection of stories from the early Kamakura period.

While she is not originally supposed to be a summonable Heroic Spirit, here she takes the form of a "representative who receives the wishes of children."

A gokusotsu (oni) who runs "Enma-tei." Adopted daugter of Datsue-ba and Yamarāja. It is said that in her previous life, she was a young girl living in a brothel who wandered into the mountains and died. At Yamarāja's command, she managed Mayoiga on the surface, and her job was to weigh the sins of the people who arrived. However, for no reason in particular, she grew fond of the nearby human village, and was caught by an old woman when she went down to the village. Afterwards, she was saved by the old man, and decided to take the stance of someone who supports "good humans," eventually taking her current form of the Shitakiri-Suzume.

Also, by popular demand from the Heroic Spirits, she periodically conducts cooking classes at the Throne of Heroes. A midget cooking teacher, and also a demonic drill instructor. Uzume is a graduate of the Benienma Culinary School. The Japanese yōkai servants have all received Benienma's training and developed under her. As such, regardless of their legendary or mythological backbone, servants who were completely unable to cook, such as Tamamo-no-Mae, Kiyohime, Osakabehime, Takiyashahime, and Suzuka Gozen address Benienma as "Beni-sensei," and respect and fear her. 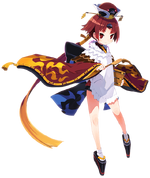 Saber Stage 1 in Fate/Grand Order, illustrated by Harada Takehito.
Add a photo to this gallery

Benienma enjoys a pen pal relationship with Tamamo-no-Mae, Kiyohime, and Osakabehime. Her cooking is on par with EMIYA. She chides the lazy, and is also a dedicated helper who serves the honest with a great deal of gusto.

A proactive introvert. While she looks precious, her personality is closer to that of a swordsman or an official than a young girl. As she is earnest and considerate, she communicates respectfully and seriously, no matter who she is talking to.

Even though she is not someone like Tamamo-no-Mae or Kiyohime, who can live entirely according to their own whims, she does not bear animosity towards similarly impulsive people, and will not reject them. Although she carries the atmosphere of a fair, cool-headed judge, in reality, she is a loyal sparrow who deeply treasures every favor done for her, holding them close to her heart.

It is said that her iai technique is capable of cutting off a single layer of skin, and that she will even cut off tongues that spin lies...or not...?

"I will not take your life. But, I will not let that lie go!"

Basket of Stars (Big): EX Secret no. 1 of Benienma's sewing technique. The wicker-basket of recompense. Benienma takes two wicker-baskets about the size of dice out of the sage's robe, and unseals them. The unsealed wicker-baskets take form as one big basket roughly 1 meter across, and one small basket roughly 30 centimeters across. The wicker-basket of recompense applies an assortment of bad luck......negative effects on the enemies, but also restores their HP a little. No matter how hard she is provoking the opponent, Benienma does not forget that this skill is still a present at its core.

Basket of Stars (Small): EX Secret no. 2 of Benienma's sewing technique. The wicker-basket of gratitude. Contains the sparrow's blessings gifted to the honest old man. Causes a variety of good-luck effects for the party, and even restores their HP. Oh man, that's freaky. Also restores a little HP to the enemy side, for some reason. No matter how much she sets up a favorable situation for her team, in any case, Benienma does so in a present-giving fashion.

Retrieved from "https://typemoon.fandom.com/wiki/Saber_(Fate/Grand_Order_-_Benienma)?oldid=155733"
Community content is available under CC-BY-SA unless otherwise noted.