Saber's True Name is Surtr (スルト, Suruto?), a Fire Jötunn and King of Muspelheim who brings the Twilight of the Gods during Ragnarök,[1] burning the nine realms at the climax of the battle, after which the world is renewed.

Within the history of the Norse Lostbelt, Surtr killed and devoured Fenrir. This allowed him to carry out complete destruction of the gods, with the exception of Skadi due to the machinations of Odin. He was eventually sealed in a black sun through the sacrifice of Odin.

In the Norse Lostbelt, Surtr appears as a gigantic flaming figure. After acquiring Fenrir's power, the left side of his body assumes an icy form.[2] 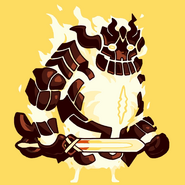 In the timeline of the Norse Lostbelt, against the intended events of Ragnarok, Surtr devoured the wolf Fenrir, gaining immense power that thwarted all the gods. Instead of bringing the Twilight of the Gods as he was suppossed to, he chose to bring about the Twilight of the World. He killed many gods and the leading giants, until he was sealed inside a false Sun by Odin, who also died in the process.[1]

During the final battle against Chaldea, Surtr was defeated by a combined attack of Sigurd and Brynhildr, after Napoleon managed to wound him with his Noble Phantasm.[1]

Surtr's sword is a Noble Phantasm called Laevatein: The Sword Akin To The Sun Of Calamity, described as a Divine Construct created by the planet itself[3], with absolute priority over living organisms possessing form and flesh, such that not even Gods of the Age of Gods would be able to withstand it.[1] When the Noble Phantasm is activated, it carries an insane amount of magic energy and emits a heat of 4 million degrees Celsius.[2] The syncretism of Surtr's weapon - the sword of flame, as well as Freyr's sword of the sun and the weapon of the Norse god Loki. Since it is a legendary sword safeguard by Surtr's wife Sinmara, it is covered with 9 seals. The weapon of giants, gods as well as that which brings forth destruction.[4]

With Laevatein, he is able to perform Loptr Laegjarn (Loki Laevateinn): The Sword Of Flame Shining Brighter Than The Sun (, ?), an Anti-Fortress, Anti-Divine, and Anti-Life special attack.

During his initial manifestation in the Norse Lostbelt, he possessed and exhibited the abilities Monstrous Strength B+++, Branch Destruction (枝の破滅, Eda no Hametsu?) A++, Giant Husk (巨人外殻, Kyojin Gaikaku?) A, and Scorching Body (灼熱の体躯, Shakunetsu no Taiku?). After regaining the abilities he obtained from consuming Fenrir, he displayed the abilities Body of Fire and Ice (氷炎の体躯, Hien no Taiku?), Beast of Einherjar (戦死者の獣, Senshi-sha no Kemono?), Freezing Membrane (氷霜皮膜, Hyōsō Himaku?), Final Flame (終わりの火片, Owari no hihen?) and Breath of the Ice Wolf (氷狼の息吹?)[2] His material Profile also shows he possesses Magic Resistance EX, Riding -, Independent Action EX, Territory Creation EX, Beast of War casualties A+, and Wind of Niflheim B+.[4]

Riding (騎乗, Kijō?) (X): He obtained the Saber class saint graph as he formed contract with Ophelia. The skill was discarded from being considered to be "unnecessary".[4]

Territory Creation (陣地作成, Jinchi Sakusei?): As he burns the earth he expands his territory at the same time.[4]

Monstrous Strength: Skill that demonstrates the destructive nature of the giant of the end. Since it couldn't fit into the Saint Graph's frame, the "+++" is displayed as a kind of bug.[4]

Giant Husk: The body of giant species is tough. This extremely special composition allows him to absorb energy from attacks and convert into magic energy. Once the absorption limit is reached (attacks and Noble Phantasms of certain rank) and conversion into magic energy is not possible, he will then take damage.[4]

Limb of Ruin/Branch Destruction: The flame of Surtr spoken in "Prophecy of the Priestess". It is the skill Mana Burst of the highest rank in the form of flame, and at the same time an armor against all form of temperature changes and physical attacks, an armament to cleanse abnormal statuses. Originally a Noble Phantasm turned into a skill.[4]

Wind of Niflheim: Blizzard of absolute freezing temperature flowing from the world of frost and ice that Fenrir ate. Not used in FGO.[4]

In the timeline of the Norse Lostbelt, Surtr, having devoured Fenrir and gained his Authority, became a Giant of Fire and Ice. Having inhabited Sigurd's flesh, he also inherited an aspect of Fafnir. After consuming the Fantasy Tree "Sombrero", he even usurped Scáthach-Skadi, as the King of the Lostbelt, and was very much a world-ending disaster.[1]

He was capable of making use of the karmic bond formed with Ophelia Phamrsolone when the two made eye contact to hijack Ophelia's Servant summoning and inhabit Sigurd's body. He placed a curse on her when he was summoned, which when triggered would leave her no choice but to witness the end of the world at his side.[1]

Retrieved from "https://typemoon.fandom.com/wiki/Saber_(Fate/Grand_Order_-_Surtr)?oldid=153337"
Community content is available under CC-BY-SA unless otherwise noted.