TYPE-MOON Wiki
Register
Don't have an account?
Sign In
Advertisement
in: Characters in Fate/Grand Order, Introduced in 2021, Servants,
and 14 more
English

A patriot who shot through Japan during the Bakumatsu period. Born to a low-ranking samurai in the domain of Tosa, he left the clan and trained under Katsu Kaishuu, eventually establishing the Kameyama Company which would later become the Kaientai. He played an instrumental role in mediating the Satchou Alliance and restoring imperial rule, and contributed greatly to the Meiji Restoration. However, he himself did not live to see the Meiji era, dying to an assassin's blade whilst still in the midst of his ambitions.[1]

He appears as a slender, aloof man in his mid-twenties.[1] 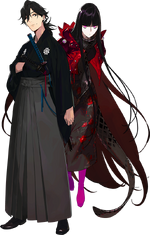 He is trained in the Hokushin Ittō-ryū style of swordsmanship, but he is a gentle person at heart who would rather avoid wielding a sword if he can. Instead, a mysterious beauty glued to his side during battle can be seen doing most of the fighting.[1]

Lancer Ryouma was summoned in the Holy Grail War before Chaldea's arrival, known as the Boshin Holy Grail War, however he was possessed by Ama-no-Sakagami once he was summoned. He killed Ranmaru and kept Nobunaga's head.

The voice coming from the spear tells Ryouma that him using Amasakahoko to awaken Oryou will turn her into a celestial dragon to be his guardian, and grant him the right to call himself a god. However, the love the two have for each other made both of them reject their chances for godhood so that the two can be with one another, and Ryouma using the spear to awaken Oryou turns Ryouma into someone more than a human but not quite a god and Oryou into a white serpent who is not a dragon.

He is best suited in the Rider class, but for some reason he has now been summoned as a Lancer.[1]

In addition to materializing in one of the three knight classes in the Holy Grail War as a Lancer, this Sakamoto Ryouma possessing Ama-no-Sakahoko is a hypothetical version of himself that he had the potential to reach, as well as being a powerful Servant capable of living up to his name as a hero of the Reformation.[1]

When the Heroic Spirit Sakamoto Ryouma is summoned as a Servant, his Noble Phantasm is usually limited to either the spear or the orochi. The fact that he can handle both at the same time is something of a miracle that one can only guess at.[1]

In combat, Ryouma uses two katanas, a pistol, and the spear Ama-no-Sakahoko as his primary armaments. He is trained in the Hokushin Ittō-ryū style, and although his skill in swordsmanship is impressive, the certificate he received includes long-handled sword usage. As he can go all out with this power while summoned as a Lancer, in addition to the explosive power of Super Oryou-san, they are a near-invincible Kaientai.[1]

Sakamoto Ryouma is illustrated by pako.