Sion Eltnam Sokaris (シオン・エルトナム・ソカリス, Shion Erutonamu Sokarisu?) is a member of Atlas supporting Chaldea Security Organization in the Grand Orders of Fate/Grand Order. She is the Master of the Captain. She is the version of Sion appearing in Fate Worlds, while Sion Eltnam Atlasia is the Sion of Tsukihime Worlds.

Zepia Eltnam Atlasia picked Sion as his daughter because she was his most talented descendant and acted as a father figure to her.[1]

Sion is a woman with long purple twintails, black/green hat, and glasses. She wears a white shirt with green tie, covered in a purple blazer and white skirt. 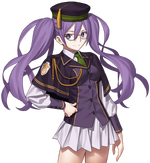 Walk in the Park (ウォーク・イン・ザ・パーク?) for the 5th Fate/Grand Order anniversary, illustrated by Nozaki Tsubata.
Add a photo to this gallery

She is a talented woman who is devoted to her research with a positive thinking.[1] She lacks the elitism of most Atlas scholars, being far more focused on the preservation of humanity and frustrated with her colleagues' single-mindedness.

Unlike her Tsukihime counterpart, her mind is stable and she doesn't hate herself.[1] She is also noticeably less serious and high-strung, though she is still proud of her intellect. While she still grew up without any friends in Atlas, Zepia was such a doting parent that she grew up positive, strong, and just as annoying as her father.[1]

Sion foresaw the invasion of the Alien God and attempted to warn the other members of the Atlas Academy about it, only to realize that they were so busy trying to avert their own visions of the apocalypse that none of them could spare the resources to aid her. Upon being told by her father that since she was the one who saw the invasion it would be her responsibility to stop it, she traveled from Atlas to the Wandering Sea based on the knowledge that it would not be affected by the bleaching of the world. While the mages of the Wandering Sea were not concerned about the wiping of humanity's texture from the world since it had nothing to do with the Age of Gods, they allowed Sion to stay as long as she did not disturb them. Sion and her Servant Captain repurposed the entrance area of the Wandering Sea into a replica of Chaldea's old base, as she expected that they would be able to use her Paper Moon system to escape into Void Space and was sure that they were in the best position to fight the Alien God and the Crypters. She sent a radio signal out Chaldea telling them she was at the Wandering Sea.

After Chaldea finishes their business in the Norse Lostbelt, Sion and Captain greet them when they arrive at the Wandering Sea.

Sion tells the Chaldea group that the Lost Depth of the English Lostbelt is immeasurable, with its Human Order on the brink of collapse, and the humans will likely be extinct in a few months. Additionally, the English Lostbelt is surrounded by a wall of light, in contrast to the wall of storms surrounding the other Lostbelts, a difference that concerns her.

Upon learning of the Ortinax from Da Vinci, she proposes the idea of augmenting its Bunker Bolt mechanism with a replica of the Black Barrel.

Sion sends Nemo and the Chaldea crew to the Indian Lostbelt so that they can use the Arronax Phantasm necessary to prepare the Shadow Border to cross into the Atlantic Lostbelt.

Sion is capable of drinking blood, but she is neither a Vampire nor a Dead Apostle.[1] During the Ooku event, Sion mentions that she didn't disappear like the rest of Chaldea because her tie to human history has been cut. That's a characteristic of Dead Apostles.

As an Atlas Alchemist, she is capable of using Memory Partition. Sion is also capable of Spiritron-Hacking.[2]

Sion was capable of using a bootleg version of Chaldea's summoning system to summon Captain.

Retrieved from "https://typemoon.fandom.com/wiki/Sion_Eltnam_Sokaris?oldid=200522"
Community content is available under CC-BY-SA unless otherwise noted.