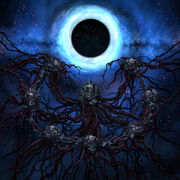 The Singularity occurred in the year 2016 within Ars Paulina. During his reign and lifetime, Solomon created seventy-two familiar called Demon Gods, which are collectively known as Goetia.[1] Goetia was created as both the foundation for human magecraft, and a ritual to watch over humanity.[1][2] He ruled alongside Solomon, but despite seeing and experiences the things, they both reached different conclusions about humanity.[2] He came to hate both humans and Solomon; humans for the atrocities they committed; Solomon for ignoring the suffering and cruelty of humans, and wishing to not correct them despite his God given powers.[3][4] When Solomon died, Goetia continued to exist as a primordial curse. He proceed to incarnate himself through a summoning spell, and took control of Solomon's corpse.[1] Believing the fear of death is why human life is meaningless, he sought to recreate the planet so death doesn't exist. He conceived a plan to destroy humanity so he could gather and use 3000 years worth of magical energy travel back to the planet's genesis. There he will absorb the energy into himself, and recreate the planet as per his vision.[2] As the first part of his plan, Goetia implanted Demon Gods as a curse into distinct mage lineages where they'll be passed down until they're awakened at their appointed era.[3] Afterwards, he went to Ars Paulina, a reality marble and workshop existing outside space and time, to await the Demon Gods's awakening. Once they were all awoken, he proceeded to activate the Singularities to fracture human history, thus initiating the Incineration of Humanity. With humanity incinerated, Goetia gathered the magical energy into Ars Almadel Salomonis, creating the band of light seen throughout the Singularities.[1]

As Ritsuka and Mash Rayshift to the Singularity, they see a vision of clairvoyant speak about how unable humanity's endless suffering is. They see all the horrors of the past and future. In order to rectify the world's repulsive state, they will destroy humanity, and redo everything from nothing. Their plan is to recreate the planet from its very origin, which requires the massive amount energy generated by incinerating all life across 3000 years.[3]

Ritsuka and Mash wake up from the vision to find themselves at the Time Temple. Leonardo Da Vinci reports there is a Beast detected throughout the entire space. Lev Lainur Flauros confirms this, and commends Chaldea for getting past the Seventh Singularity. He reveals he has served Solomon for 3000 years. The Demon Gods were implanted in mage lineages until they were awakened at their appointed era. He was the one designated for 2016, and when he awoke as the last Demon God, humanity was incinerated. Da Vinci reveals Chaldea survied because Romani Archman spent a decade preparing for the Incineration of Humanity that he saw in a dream. Lev Lainur reveals he intended to kill Romani with the Control Room explosion, but that plan was thwarted with Ritsuka's intervention. Declaring Solomon's final calcuations will be completed in a matter of hours, he transforms into Flauros to stop Ritsuka and Mash from reaching Solomon's throne. The pair kill him, but he is immediately reborn. At the same time, Chaldea is attacked by eight other Demon Gods. Flauros reveals the entire space is made of Demon Gods, and they'll alway be 72 Demon Gods as long as the Throne exists. He then tries to kill Ritsuka when Jeanne d'Arc thwarts him. She heralds the autonomous summoning of many Heroic Spirits to the Time Temple through their connection with Ritsuka. She rallies the Servants to clear a path to the Throne. They then defend Chaldea and engage the Demon Gods, killing them as they endlessy regenerate.[3]

As the Servants aiding Chaldea continue defeating the Demon Gods, Baal asks Solomon to activate Ars Almadel Salomonis to incinerate the Heroic Spirits. Solomon assesses that they would keep returning as long as Ritsuka exists, reflecting the Demon Gods' own immortality as long as Solomon himself exists, and thus they only need to kill Ritsuka.[4]

After conquering the seven terminals protecting Solomon's Throne, Chaldea learn of an eighth terminal. They're uncertain how to proceed as the Heroic Spirits who aided Ritsuka and Mash with the previous terminals were connected to the Seven Singularities. However, Servants from the minor Singularities and Singularity candidates arrive to help the pair defeat Andromalius and the Demon Gods administrating the Trash Heap.[12]

With the Demon Gods' activity diminished by their constant fighting with the Heroic Spirits, a path opens to the Throne. On the way there, Da Vinci confirms that no Demon Gods are detected ahead. Romani dismisses the notion that Solomon is a fake, as the Time Temple was created from Solomon's Magic Circuits. He deduces something inside Solomon's body is controlling his corpse. After resurrecting his corpse, "Solomon" implanted the Demon Gods in preparation for the Incineration of Humanity. Afterwards, he created the Time Temple, which exists outside time and space. There he waited until the year 2016.[1]

Upon arriving at his throne, "Solomon" declares to Ritsuka and Mash theat the final calculations for the the First Virtual Noble Phantasm, Ars Nova, are nearly complete. He explains he possesses three Noble Phantasms: the First is Ars Nova, and the Second is the Temple itself, Ars Paulina. The Third is Ars Almadel Salomonis, the light bands in the sky that were created from the energy gathered from incinerating humanity when he fractured history with his Singularities. "Solomon" needs it all to achieve the "ultimate position" and conquer death itself if humans will not. He then fights Ritsuka and Mash, intending to kill the former since they're as the anchor for the Heroic Spirits. Eventually Mash notices his Spirit Origin is strange, and Ritsuka sees one of his rings differs from the oters. "Solomon" decides to reveals his true form, as Demon Gods cover the throne. He identifies himself as the first familiar created by Solomon that served as the foundation for human magecrafted. He ruled alongside Solomon, and continued to exist as a primordial curse after Solomon's death. He then took control of Solomon's corpse, and incarnated himself through a summoning spell. With his true form unveiled, he introduces himself as Goetia, the Human Order Incineration Ritual, King of Demon Gods, and Beast I.[1]

Goetia declares his plan to travel back to the genesis of the planet and absorb all of its energy to create a new planet without death. The Incineration of Humanity was for gathing 3000 years worth of magical energy to accomplish this feat. Ritsuka and Mash attempt to defeat him before he can activate Ars Almadeal Salomis, but they're too late. Goetia offers to let Mash join him, believing she would undestanding his views on death since she was created with a limited lifespan. Mash rejects due to her experiences with Ritsuka, so Goetia launches Ars Almadel Salomis. Mash protects Ritsuka with Lord Camelot, but the heat of Goetia's Noble Phantasm vaporizes her, leaving only her shield. Goetia prepares to launch his Noble Phantasm again when Romani suddenly arrives. Romani removes his glove to reveal Solomon's tenth ring, which was sent into the future by Solomon. Marisbury Animusphere also used it as catalyst to summon Solomon in the Holy Grail War of 2004. Romani explains Solomon's wish on the Grail was to become human. However, he foresaw the Incineration of Humanity before all of his power left him. Romani then manifests as his original self, Solomon, having abandoned his wish. Goetia tries to kill him, but Solomon, with all of his rings present, activates the true Ars Nova. This sacrifieces his existence as a Heroic Spirit to remove Goetia's immortality. Before disappearing, Solomon reveals Goetia was originally a spell created to watch over humanity, but Goetia turned away from that duty after seeing humanity's suffering and atrocities. Goeties then tries to kill Ritsuka to remove the Heroic Spirits, intending to activate Ars Almadel Salomonis before the union of the Demon Gods that comprise him completely collapses.[2]

With Solomon's sacrifice, the Time Temple begins to collapse, and the Demon Gods are thrown into disarray. They either self-destruct, destroyed by the Heroic Spirits, change side, or flee. Goetia's body begins to crumble away due to Ars Nova destroying the Demon Gods' union. Even when only three Demon Gods remain, he refuses to admit defeat and attempts again to kill Ritsuka. Ritsuka protects themselves with Mash's shield, and seemingly destroys Goetia with a punch empowered by a Command Spell. Ritsuka hurries back to the Rayshift point before the Temple collaspses. However, they're stopped by Goetia in a human form made from all that remains of the Demon Gods. Understanding human mentality with his newly gained mortality, he tries to kill Ritsuka to protect his pride. After Ritsuka defeats him, Goetia disappears contently. Ritsuka then continues escaping, Ritsuka continues on their way, but the path beneath them collapses before they reach the Rayshift point.[13]

Meanwhile, in the aftermath of Mash's sacrifice, Fou locates her soul in the place beyond life, revealing his true name as Primate Murder and his nature as a Beast. He then expends the majority of the Magical Energy that he collected across the centuries of his life to transplant his Force of Providence into Mash's soul. This perfectly resurrects her and grantis her a normal human lifespan. However, the act deprives Fou of both his sapience, leaving him as nothing more than a common animal. He congratulates Mash and Chaldea for defeating Beast IV without violence. Mash then arrives just in time to save Ritsuka, and return to Chaldea together.[14]

Retrieved from "https://typemoon.fandom.com/wiki/Solomon_Singularity?oldid=151069"
Community content is available under CC-BY-SA unless otherwise noted.