Spirits (霊, Rei?) are spiritual bodies used by the planet as a sense of touch, and anything that interferes with them is considered a contradiction. There are several types of spirits and despite the fact that they can be found everywhere only those humans who possess a spiritual affinity can perceive them. Spirits are generally harmless to people, but those of the elemental class are of such a dimension that they can interact with people by taking a physical form. Presently, science cannot interfere with spiritual bodies and modern Magecraft cannot reproduce mysteries of such scale.

There are many spirits born from human folklore and human traditions due to humans being able to "engrave" a Thaumaturgical System (魔術系統, Majutsu Keitō?) upon the World ─ a body of preestablished rules, fomented per the faith of the populace. If it is believed that the subject of a Mystery "exists," the World permits its existence. Definite affirmation of said belief is not required, so even though the majority of modern humans reject the existence of ghosts, modern science cannot outright demonstrate that they do not exist, and, thus, within the unconscious, there lurks the vague suspicion that "they might indeed exist." This sort of "suspicion" falls under the category of "faith." "Ignorance" is the force that opposes "faith". If the existence of ghosts is itself utterly unknown, faith cannot foment.

Beings without physical form have a Spiritual Body (霊体, Reitai?), that with spiritual properties where a shape is constructed without components with physical properties. Differing from a Material Body, that which is identical in structure to flesh bodies, that cannot walk through walls and becomes injured when beaten, spiritual bodies are capable of completely disregarding such physical interference. Without conceptual[1] or magical properties, those with a Spiritual Body cannot be harmed with a baton or sword, and such attempts will only hit empty space. Those that can switch between both properties, such as Servants, have advantages and disadvantages in both states.[2]

An Elemental (精霊, Seirei?) is a general category for a variety of spiritual bodies (霊体, Reitai?). It is a class of Mystery whose foundations can't be replicated by Magecraft, and a rare number of Phantasmal Species were capable of advancing to becoming Elementals. There are a few types of Elementals: Nature Spirits, Animal Spirits, and the artificially created Guardian Spirits. Lower class spirits such as ghosts and apparitions are not included in this category. Most of these spirits do not take the shape of a human.

Despite being a general category for all sorts of spirits, the term “Elemental” usually refers to nature spirits when used by itself. In this case, the Elementals here acts as part of the Counter Force and exists as the sense of touch for the planet. The likes of great Fairies, Vivian, Lugh Beowulf, the True Ancestors, Anastasia’s Fairy Familiar Viy, Tengu such as Kiichi Hougen, Divine Spirits (a weakened state of Gods) and other mediators of nature are first and foremost Elementals before being part of any other category.

Elementals are "power" granted form using human imagination as a container and they don't need human "faith" in order to exist. Still, even if their shape turns out to be close to that of humans, their values and logic are still unlike those of humans. Fairies that grow to a scale that can be perceived by humans become Elementals. True Ancestors, who are classified as a type of greater fairy, fall into the category of an Elemental. Incarnated Elementals like Hinako Akuta are even capable of "dying" and being recorded into the Throne of Heroes, as they can choose how they wish to incarnate themselves.

The mediators of nature are capable of using Marble Phantasm[3] and just like Daemons,[4] use Reality Marbles.[5]

Nature Spirits (自然霊, Shizenrei?) As the name states, a spirit born from elements of nature such as plants, soil, gemstones, natural phenomenons and etc. Ores and jewels that have been beneath the surface for an extended period of time generally carry powerful nature spirits. This spiritual bodies are formed by the will of the planet earth and they gain power from nature itself. Only those nature spirits, who are wanted by the planet as a defense against the resource-plundering actions of humans, can receive a body made out of flesh from the planet. These supernatural entities are known as the Transcendent Kind, one known member of this category are the True Ancestors who are said to be Planet-class Spirits, a rank higher than Divine Spirits.[6]

Djinn (ジン, Jin?) The wind demons of the middle eastern tradition, well known for being very mischievous. With bodies made of gas and smoke, they can float in the wind and are mostly invisible, but are capable of producing solid forms when necessary. In those cases, they preferably take the shape of an ogre with the face of a dog and the back of a cat, but cases where they take the appearance of a beautiful human or some beast such as snakes are not unheard of. Their exists a curse which is passed down in the Middle East that is used to ward off storms and Jinns. It is used by True Assassin in the Heaven's Feel route of Fate/stay night's Fifth Holy Grail War. Queen of Sheba is a half-blood between a male human and a female Genie (Djinn), inheriting clairvoyance precognition (future sight) from her djinn heritage.

Animal Spirit (動物霊, Doubutsurei?) The spirits of dead animal's. Differently, as by the souls of dead humans, who are generally formless existences, animals retain their form from their former lives. But they are, just as Human Spirits, able to consume the souls and minds of people and convert them into energy. The basic abilities they had from the time when they where alive still remain but they don't change from such nourishment, as they only become tougher as their magical energy capacity increases.

Kitsune and Inukami (狐、犬神, Kitsune, Inukami?) The traditional nine-tailed fox and dog-familiar spirits of Japanese folklore, they are attributed of being the source of people’s insanity by possessing them. Also, in cases where a daemon possession causes the emergence of multiple personalities due to the host surrendering his rights of ego, the resulting alternate persona is said to be these spirits themselves accordingly with Japanese beliefs. However, unlike the nonsensical accidents that are the Western daemon possessions, there is a definite reason and “will to curse” behind the cases of possession that are brought about by these spirits.

Neco Spirit (ネコ精霊, NEKO Seirei?) refers to the type of spirits that reside in the Great Cat's Village. Members of the race include Neco-Arc, Neco-Arc Bubbles, Neco-Arc Chaos, Neco-Arc Evolution and Neco-Arc Destiny. 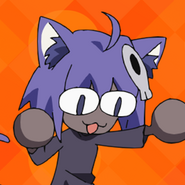 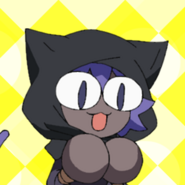 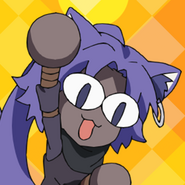 Guardian Spirit (守護精霊, Shugoseirei?) is a classification of spirit that comes from the result of merging an Animal or Nature Spirit with a human soul. It is not something that happens naturally, but rather is something that is made by the hands of men in order to give human values to something that is not human. The spirits of humans are of a much lower rank, than nature or animal spirits and are thus absorbed in, but as a result, it acquires knowledge as a human, and gradually acquires a human's value. These Spirits must be bound, to objects or to places, in order for them to stay in this world. It also takes quite some time for the human spirit to gain control of themselves as well as to gain their own spirtual body. In order to materialize themselves, they require a supply of magical energy beyond that of most people. Guardian Spirits cannot be observed in spirit form by anyone, except for the Master they are connected with. They can talk with each other and the Guardian Spirit can go scouting, by flying in their spirtual form. The best examples for Guardian Spirits are Nanako[8] who inhabits the Seventh Holy Scripture[9][10] from the Church and the Argon Coin[11] possessed by Medea.

They are considered to be below other types of Elemental, but have the potential to become Holy Spirits (聖霊, Seirei?). These Holy Spirits can possess Mystic Eyes, which are designated as Jewel under the Noble Colors system. They surpass the Gold-ranked Eyes of the Dead Apostles and are exclusively possessed by Holy Spirits and Magical Beasts from the Age of Gods.

Lower-class Spirits (下級霊, Kakyuurei?)
Vague, generally formless existences that can only acquire a definite identity by “possessing” an image.

Wraith (亡霊, Bourei?), also referred to as Ghosts (幽霊, Yūrei?)[12] or Human spirits, are souls of dead people that remain attached to this world due to past grudges, regrets and other sorts of unfinished business that they had during life. As such, they tend to haunt places, items or people that are related to their unfinished business. Areas filled with grudges and remnants of strong regrets are like Reality Marbles to spirits.[13] Normally, direct physical intereference on the part of these ghosts are low. As spiritual bodies they usually have to act through some sort of medium, by putting it under its domination, in order to conduct interference. In Kara no Kyoukai a Wraith possesses a dead corpse inorder to claim the body of Shiki Ryougi. Zouken Matou is a powerful magus who uses a species of magical worms that can combine themselves to take a human form. This human form allows him to interfere with the physical world as it binds his soul, on this plane of existence. However, as they are no longer something that belongs to this world, their existence is something that degrades with time and they are bound to disappear eventually.

But as they are Human Spirits they are able to consume the souls and minds of people and convert them into energy. The basic abilities they had from the time when they where alive still remain but they don't change from such nourishment, as they only become tougher as their magical energy capacity increases. Some people close to becoming Heroic Spirits are wraiths, and some wraiths also share characteristics with legends that allow them to be called when there is no existing hero.

The Dead Apostle Ancestor Stanrobe Calhin is referred to as the First Wraith, a disembodied soul who will not dissipate for at least another two hundred years.

In Fate/EXTRA exists the special circumstances of the SE.RA.PH, an artificial environment located within the Moon Cell. SE.RA.PH is a world where Souls are transformed into information. On Earth, one cannot live without "Mind" or "Soul". However GHOSTS can survive in SE.RA.PH as Cyber Ghosts (サイバーゴースト?). They are records reproduced of their last moments before dying. The regret etched in them won't go anywhere.[14] They are beings without bodies, wandering to seek life.

Apparition (浮遊霊, Fuyūrei?), also referred to as leftover thoughts (残留思念, Zanryū Shinen?), are fragments of an already departed soul that gathered together to form an amorphous entity that is filled with nothing but the most primitive drive to live. A projection of someone’s past records which were stored in the surroundings. The traditional ghosts in the popular sense of the world, generally harmless as almost nobody can perceive them. Technically, they can still interact and even attempt to possess those with spiritual abilities, but if their target has enough willpower they won’t be able to take over.

Examples include the spirits of the Fujou Building. The “fairies” controlled by Misaya Ouji and Len were made out of these kind of spirits.

Not much is known about the nature of Evil Spirits (悪霊, Akuryō?), but they are known to be weak against exorcism.

Retrieved from "https://typemoon.fandom.com/wiki/Spirit?oldid=191617"
Community content is available under CC-BY-SA unless otherwise noted.