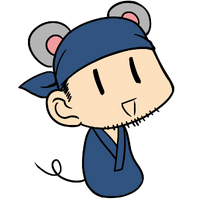 Takashi Takeuchi (武内 崇, Takeuchi Takashi?), alias of Tomotaka Takeuchi (友崇 竹内, Takeuchi Tomotaka?, August 28th, 1973), is a Japanese artist, noted as the co-founder of Japanese visual novel and anime development and production enterprise TYPE-MOON, and for his character designs and illustrations on TYPE-MOON's visual novels, Tsukihime and Fate/stay night, which were both later adapted into anime and manga series. He has frequently collaborated with his longtime friend and fellow TYPE-MOON co-founder, author Nasu Kinoko. He has a penchant for maids, and Hisui is one of is his favorite characters to draw.

Takeuchi's Noble Phantasm is Unlimited King of Knights (無限の騎士王, Mugen no Kishi Ō?) - "The mind of a human who pursues the blonde-haired female knight he adores until the utmost limit. Employing all his skills, an infinite number of characters similar to Saber will be given life. A great delusion that erodes the stance of the company."[1] One of Takeuchi's skills, Never ending influence. Rank: EX.