TYPE-MOON Wiki
Register
Don't have an account?
Sign In
Advertisement
in: Characters in Koha-Ace, Servants, Saber-class Servants,
and 40 more

A warlord and former subordinate of Oda Nobunaga, who came to rule over Japan. It is known that Oda Nobunaga calls Hideyoshi as Monkey (サル, Saru?).

He has changed his name from Kinoshita Toukichirou (木下 藤吉郎, Kinoshita Tōkichirō?) to Hashiba Hideyoshi (羽柴 秀吉?) and finally to Toyotomi Hideyoshi, reflected in his True Name changing throughout his development when summoned as a Servant. At some point during his rule, he married Oda Nobunaga's niece, Chacha. 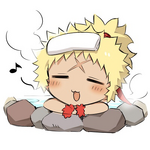 "Heh, did he come... that monkey. Listen, Chacha. I know the monkey well. He can be happy-go-lucky yet calculative, emotionally fragile yet cruel without compare. Although he is that double-faced, he regardless shines and sparkles, truly a man akin to the sun. It is not strange that he took command of the world after me. But, even for him there is one thing that he can't do. Chacha, you should know it well too. He is--- "Someone who can't raise his head only in front of the woman he loves"!" -Demon Archer

Hideyoshi is described as "happy-go-lucky yet calculative", "emotionally fragile yet cruel without compare", and "double-faced", yet someone who shines and sparkles like the sun. He is mentioned to be unable to raise his head in front of the woman he loves, Chacha mentioning how he was only nice and kind to her. Nobunaga also mentions he loves shiny things, even going so far as to make golden tea rooms and the like as a hobby.

Saber does not appear in the story of the Strange Tales of the Imperial Holy Grail, but is described as being applicable for the Rider Servant class if he were to be summoned in Koha-Ace. He later is given a profile as Saber.

In Fate/type Redline he and Nagao Kagetora cameo when Tsukumo Fujimiya explains the Holy Grail War.[2]

Saber is initially a weak Servant due to having started his reign from being a minor, no-name farmer. His Child of the Sun Noble Phantasm replicates his growth from that state into the most important person in Japan, then deteriorates him into a useless old man. His abilities raise every day for a week from when he is summoned, eventually culminating in high parameters in the state called Tenkabito Hideyoshi (天下人ヒデヨシ?). He transforms into his older state the next day and his parameters deteriorate daily over the next week. He also possesses the Noble Phantasms Sword Hunt and Sunomata Castle. He possesses the unique personal skill Great Country-wide Crossing (中国大返し, Chugoku Ogaeshi?), a miracle escape Skill that turns an absolute pinch into an opportunity. Running away is done very swiftly. Although it has an effect similar to Disengage, battle can resume in an advantageous state for Hideyoshi without fail at the time of a successful check. An anecdote of Hideyoshi taking all his troops over from the Siege of Takamatsu to take vengeance against the enemies of Nobunaga becoming a Skill.

He is designed by Keikenchi, differing from Sakura Saber and Demon Archer, his design and abilities were originally made solely by the author without any input from Nasu Kinoko, but they later conferred for the final status sheet.