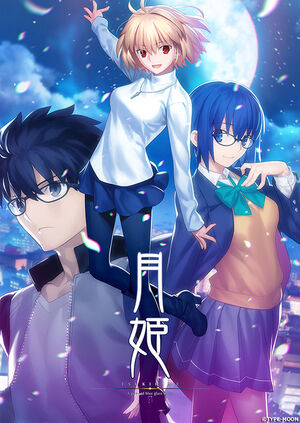 Unlike the original, there are only two routes to choose from, Moon Princess (月姫, Tsukihime?) with Arcueid as its heroine and Rainbow in the Night (夜の虹, Yoru no Niji?) with Ciel as its heroine.

After the release of Mahou Tsukai no Yoru, Nasu stated in an interview that the production of the remake is proceeding along with several other projects.[1] During Type-Moon festival, several pieces of artwork showing Arcueid, Ciel, and Akiha with redesigned appearances were featured.

Following a long period of no news, the opening movie was shown at the end-of-year Fate/Grand Order broadcast on December 31st, 2020, just a few days after the 20th anniversary of Tsukihime. With it came the announcement that the remake was officially titled Tsukihime -A piece of blue glass moon-, along with a completely new voice cast and a firm release window for Summer 2021. 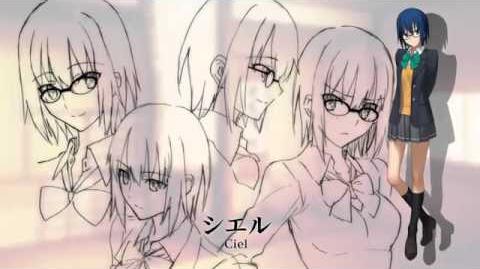 Following its release on August 26th, 2021, Tsukihime -A piece of blue glass moon- sold 77,237 units on the Nintendo Switch and 66,171 units on the PlayStation 4 (a total of 143,408 units sold at retail stores in its first week). This makes it one of the highest debuting visual novels to be released on a console since 2002.[2] The game's Nintendo Switch version reportedly sold out after its first week, leading to Type-Moon encouraging customers to purchase the digital version instead, while they restocked the game's physical copies.[3]