TYPE-MOON Wiki
Register
Don't have an account?
Sign In
Advertisement
in: Characters in Fate/EXTRA, Servants, Vampires,
and 15 more 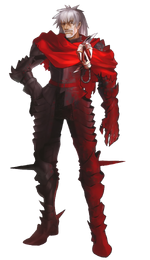 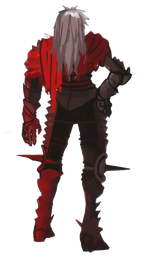 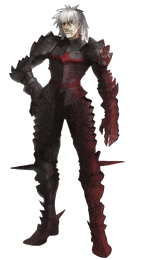 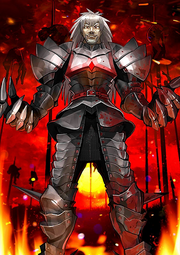 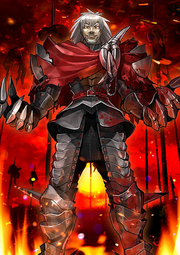 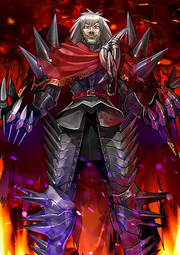 Kazikli Bey
Anti-Army[2][3]
C[2][3]
Vlad III (ヴラド三世, Vurado Sansei?), Class Name Lancer (ランサー, Ransā?), is the Lancer class Servant of Run Ru in the Moon Cell's Holy Grail War of Fate/EXTRA. He is only fought in the Rin route, while another Lancer is fought in the Rani route.

The Prince of Wallachia. He is a famous hero in Romanian history. A noble warrior who maintained the independence of Wallachia was as far as being described as the shield of the Christian world. He is also known as Dracula (ドラキュラ?), Dracula was nothing but the popular name most habitually used to refer to the lord of Wallachia, Vlad III. Strictly speaking, it was Wladislaus Drakwlya. Standpoint-wise, because he was a duke appointed by the Eastern Roman Empire, he signed under the Roman-style. This derived from the fact that his father, Vlad II, was a member of the Order of the Dragon (among a total of 24 members), which was established by the Holy Roman Emperor Sigismund, who called himself Dracul (dragon lord). In other words, because he was the child of Dracul, the a pronunciation that holds the meaning "child" was added at the end thus becoming Dracula. Incidentally, the purpose of the Order of the Dragon was to protect the Christian world from the Islamic influence. There is the possibility that Vlad III took up the name of Dracula as a form of declaration of the intention of succeeding his father will and safeguarding the Christian world from the Islamic Ottoman Empire.[3][5]

During the time of his reign as monarch of Wallachia, Vlad instituted a number of somewhat oppressive and punitive policies aimed at the lower levels of the nobility whom Vlad felt had seriously undermined and destabilized his country with their excessive corruption and political maneuverings. In addition to laws designed to curtail their excesses, he also carried out an unprecedented number of impalings amongst the noble classes. While many believed he was simply trying to reduce the number of rivals and opponents to his rule, Vlad was shockingly ruthless in his approach to justice, targeting commoners and the upper-class with equal viciousness. His kingdom became a land of horrors, culminating with the 1459 impaling of an emissary from the Ottoman Empire, who survived on the stake for several days before finally succumbing.[5]

In 1462 AD, Vlad was at a defensive war against the Turkish invasion. Because he had to oppose 150,000 Turkish troops that were like raging waves with an army of just 10,000, he instructed the use of scorched earth-tactics and Guerrilla warfare. In order to protect Wallachia from the Turkish army, he enforced discipline on the nobles that ruined the realm and sentenced 20,000 imprisoned soldiers of the opposing Turkish army to impalement, later to be known as his greatest impaling. After making the populace escape to the Carpathian Mountains, going as far as emptying the capital city, he ambushed the Turkish forces. At that time, what stood in the surroundings of the capital city of Bucharest was the impaled figures of over 20,000 captured Turkish soldiers. A swarm of countless impaled dead bodies in surrounded the citadel of Bucharest. Before such a sight and the offensive smell, the Turkish soldiers - commended for their bravery - had their morale completely crushed. Even the valorous Mehmed II, who was called "The Conqueror", was said to have withdrawn after witnessing the scene.[3][5]

The field of impaled soldiers at that time was three kilometers in length and one kilometer in width. Even during the occupation of Wallachia by the Ottoman Empire years later, the autonomy of the region continued to be recognized because of this trauma. Vlad III did not choose the means to defend the independence of Wallachia and was loathed as a devil by the Turkish. Rationality made into brutality. A warrior with an extension of vision above humans. However, he was not blessed with sympathizers and ended his life in despair due to betrayal. He was betrayed by the nobles due to the implementation of a doctrine of rigorous measures. His death came in the form of assassination by the Wallachia nobles that were his subordinates at the age of 46.[3][5]

The name Dracula is now associated as a Vampire. A demon that sucks blood. Under the assumption that it is not a living being created by the Lord, it was painted as an easy to understand antagonist by a certain religious view. Described as drinking the blood of humans, not growing old, being immortal and accompanied by many beasts. This person who became one of the most famous monsters in the present world. It can be said to be the greatest sample-case of a literary work that distorted reality but it is also a fact that not all can be categorized as insolence of the writer.[5]

Vlad's appearance is that of a warrior or knight in his late 40's with slightly long, light gray hair coupled with blood red eyes and a beard. His appearance changed drastically compared to when he was alive, the reason is due to his Innocent Monster skill.

Like his Master, Vlad is a deranged individual with twisted notions of love, expressing his feelings when killing his opponent. He shows great affection towards his Master, referring to her as his "wife". The reason for his personality and affections towards his master can be blamed for his skill, Protection of the Faith, which increasingly degrades a Servant's sanity and personality the higher its rank (his being ranked A+++). He retains his devotion to the Christian faith, although he is convinced that he is no longer worthy of God's love on account of his sins.

Vlad III
"Seeing my own figure, one who reigned as a feudal lord, I do wonder what is in his mind, seeing the version of him who lived as a knight....."
Nero Claudius
"The trailblazer of Christian persecution. Of course, she and I simply can not cooperate. We cannot, but I, Vlad III, too am someone who had turned into devil at the end of my faith. As a mutual devil, we are assuredly perfectly compatible to slaughter each other."

The manga adaptation of Fate/EXTRA, he went on a killing frenzy on the NPCs and the participants in the preliminaries. He tried to kill Hakuno Kishinami and Shinji Matou until Rin Tohsaka summons Lancer to fight him, but both of them survived. He briefly fought against Atalanta until Saber intervened.

He guards the front gate of Castle Csejte, barring Elizabeth Bathory's party from entering. He declares to Elizabeth that he has come to judge her for her sins. Though the group defeat him in the ensuing battle, he gets up and tells Elizabeth that she doesn't understand. He says she needs to understand if she wishes to call herself a hero. Later, hearing the town festivities, he allows Elizabeth to pass. However, he decides to kill the group for the horrendous acts Elizabeth committed in life. After being defeated, Vlad denies Elizabeth calling him her uncle, saying she should call him that when he’s summoned as a king. He tells her that he will never forget her sin, even if the world has. For the sake of his wife, he will never forgive Elizabeth's sin, even if his wife may have, and disappears.

Vlad roams the Thighs barring anyone trying to reach the chapel there. He kills both Servant and human alike who fell into depravity. When Ritsuka’s party confronts him, he is surprised to see a Master. He decides to kill Ritsuka, believing no human should live in a place depraved as SE.RA.PH. As the group ready to face him, he declares there is a Demon God inside him to Ritsuka’s confusion. After he’s defeated, Ritsuka asks him about what he said earlier. Vlad regrets what he said, dismissing it as his passion getting the better of him., and tells Ritsuka to hurry to the chapel if they wish to know. He reveals EMIYA is in the chapel, though he is not be trusted. He disappears, warning that on SE.RA.PH one will be absorbed the moment they show weakness no matter who they are.[6]

Vlad helps plant cacao trees to produce more chocolate. Later, he, Cú Chulainn, Karna, and Diarmuid Ua Duibhne find themselves unable to harvest cacao plants crossbred with mandrakes thanks to its scream. Semiramis told them the plants must be harvested today, as they'll likely wilt by tomorrow. Cú Chulainn go gets Nero Claudius and convinces her to sing by saying music helps plants produce a greater yield. With Nero's song countering the screams of the cacao mandrakes, and their ears protected by runes, the Lancers are able to her harvest the plants. Everyone soon finishes and Nero leaves, satisfied that she could help. Karna however points out that they have another field to harvest. Cú Chulainn leaves to go get Elizabeth Bathory.

In Type-Moon's April Fools' Day 2015, Vlad is in a group called YARIO and is part of the Imperial Roma talent agency, his class is Farm idol unit (牧歌的アイドルニット, Bokukateki aidor unitto?).

True to his title as "the Impaler" and as a Lancer-class Servant, Vlad III is highly skilled in the use of polearms. While other servants of his class typically possess high agility, Vlad is instead fairly slow in exchange for paramount defensive power. Despite this, when met in the Coliseum he dives at the player and their servant from atop a nearby rock.

Vlad III's Noble Phantasm is Kazikli Bey: The Fortress of Impalement is his signature move. He surrounds the area around him and his opponent with countless spears and polearms of different kinds, doing so until the enemy is eventually impaled before throwing his own spear at them.

Noble Phantasm: In Fate/EXTRA, the attack ignores defense and inflicts the "Sacrifice" debuff on the target, causing heavy damage at the end of each turn and disappearing only when removed by a spell, skill, or item that removes status ailments, or letting the target's HP drop to 1.

Takeuchi Takashi was responsible for Vlad's design. Originally he was planned to have a long cape but this was mostly scrapped due to the technical difficulties with the PlayStation Portable hardware.