TYPE-MOON Wiki
Register
Don't have an account?
Sign In
Advertisement
in: Servants, Characters in Fate/Requiem, Foreigner-class Servants,
and 19 more
English 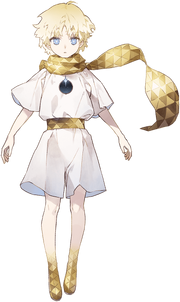 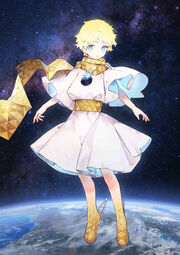 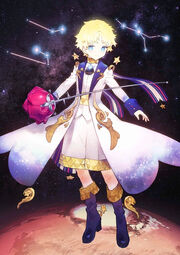 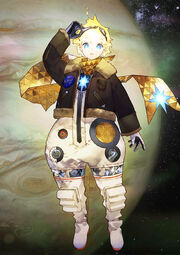 I love travelling. There are so many kinds of journey, but mine is, a very long one, so it's hard to, return.

I'm scared of snakes. But like, when I look at them closely, they are beautiful, there are some good things about them after all.

"After" the Holy Grail War

Pale Blue Dot
Anti-Planet[1]
B[1]
Voyager (ボイジャー?) is a Masterless Voyager-class Stray Servant "After" the Holy Grail War‎‎ in Fate/Requiem. He is later contracted to Erice Utsumi.

The space probe Voyager 1 was launched in 1977 via rocket from Cape Canaveral, Florida.[2] After completing its studies of Jupiter, Saturn, and various other planets in the Solar System, Voyager began its endless journey through interstellar space. Even now he still travels through the sea of stars in places outside the boundaries of our Solar System.[1]

Nzambi speculates him to be the Holy Spear and/or from the future, but neither are confirmed.[3]

Voyager is still a very young Servant, in two different senses of the word. He's a Heroic Spirit from the extremely historically shallow present era, and has the body of an 8-year-old boy. Although he's actually an aggregation of aluminum alloy observation tools, he acquired a Saint Graph equal to a human in order to properly communicate with his Master and fight the Holy Grail War until the very end. As a downside to this miracle, the general knowledge installed in him was lacking, his vocabulary is a bit insufficient, and his body is not anything we could call robust. His general appearance takes a huge subjective influence from Erice, a Master he's deeply connected with,[1] who is a fan of the "The Little Prince" children's book.[4]

A mythical boy who appears before Erice. He appears to be around age 8 or so, and possesses angelic features, such as pale blonde hair that is almost white, blue eyes, and a pale Caucasian complexion. He is dressed in a white cotton tunic and shorts, with a circular image of space beneath an eight-pointed star, as well as golden boots which are tapered at the back much like spurs for horse riding, a belt, and a scarf/muffler which flutters of its own accord without wind, all made of the same material.

He is occasionally seen wearing aviator goggles on his head. The goggles originally belonged to his Master, Erice.[5]

His golden scarf is always swinging away.[1] His outer appearance was significantly influenced by the thoughts of his Master Erice Utsumi, whom he shares a deep relationship with.[1]

Voyager in Fate/Requiem, illustrated by NOCO.

Looking Up at the Starry Sky (見上げた空の星に, Miageta Sora no Hoshi ni?) in Fate/Grand Order, illustrated by Rella.

Voyager goes along very well with Kijyo Koyo like a kid with a huge dog, and is strangely attracted to music. He is emotionless, clueless, quiet, and almost fearless, but displays high curiosity on something that catches his attention.[6] He has also mentioned he has a fear of snakes, and is willing to fight any opponent, no matter how powerful, so long as the opponent isn't a snake.[3] He has also shown displeasure about being hot in a bath.[4] He lacks a large amount of knowledge that one would naturally assume the Holy Grail would provide, such as what a bath is, or even the concept of War, to the shock of Erice, Koharu, Galahad Alter, and Hannibal.[5]

After Erice learns his True Name, Voyager becomes more coherent and less absent-minded, as if his ego and sense of purpose have risen to the surface. He also starts becoming more stubborn and argues with Erice more, such as over what to have for breakfast. While still curious, he is not quite as captivated by every little thing like before.[7]

He's as curious as any space probe should be. He's proactive and wants all kinds of new experiences. Smell and taste are entirely new senses to him, so he's a sucker for good meals and rare desserts. Even in unknown places, he displays an absolute sense of direction and space comprehension. He has excellent hearing and memorizes everything he sees or hears. Although his vocabulary leaves much to be desired, he understands various languages. He loves listening to all kinds of music and can immediately be captivated by live performances. He seems a bit afraid of baths.[1]

He has a tendency to speak in English, likely because he is an American creation. He asks Erice the iconic "I ask you, are you my Master?" in English instead of Japanese.[8][9] He pronounces words with their American pronunciation instead of their Japanese pronunciation, such as "centaur" instead of "kentaurosu" and "Jason" instead of "Iason".[10]

Voyager's dialogue is all written in hiragana to demonstrate his childish nature.

The Boy Among the Stars[]

Erice Utsumi meets Voyager when she is attacked by Kundry and knocked into the water. Voyager appears floating above her and asks her if she is worthy to be his Master.[8] Erice brings him to her home and starts looking out for him, while also trying to figure out his identity. She also starts to hope that he was her Servant, but no Command Spells ever appear on her hand. Caren Fujimura charges Erice with watching over the boy and hopefully figuring out his True Name.[4]

Caren says she can't discern even his Class from his Saint Graph. Erice speculates that he is either Antoine de Saint-Exupéry or The Little Prince, but he does not recognize Saint-Exupéry's airplane nor the "The Little Prince" book. Caren temporarily decides to call him The Little Prince (TBD) (星の王子さま（仮）?),[4] while Karin decides on Pran (プラン, Puran?), from the French pronunciation of "prince".[6] He is given a toy Caudron C.630 Simoun by Erice with the same lettering as the one flown by Saint-Exupéry,[6] and also takes a liking to Erice's antique aviator goggles.[5]

When Nzambi attacks the Holy Grail Tournament, a black dog calls out to Voyager and tells him to pass along a message to Erice's grandmother Chitose Manazuru: that death has come for her.[3] In the fight with Nzambi Voyager destroys her sword and forces her to retreat.[3] Afterward Chitose demands that Erice hand Voyager over to her, and when Erice refuses Chitose has Lucius attack him. After Galahad Alter deflects Lucius's attack, Chitose leaves without a word.[9]

After Chitose leaves, Command Spells form on Erice's hand and Voyager once again asks her if she is his Master. As the two of them make their contract, Erice declares his True Name of Voyager with tears in her eyes, and Voyager pledges that together they will end the Holy Grail War and destroy the world.[9]

After Erice learned his True Name, Voyager has become more coherent and less absent-minded, as if his ego and sense of purpose have risen to the surface.[7]

Voyager was called to the Nautilus incident along with the rest of Chaldea's Foreigners, but Erice kept him from going.

Normally being of the Voyager-class, Voyager is summoned as Foreigner in the world of Fate/Grand Order.[10]

He's a Heroic Spirit from the extremely historically shallow present era, and has the body of an 8 years old boy. Although he's actually an aggregation of aluminum alloy observation tools, he acquired a Saint Graph equal to a human in order to proper communicate with his Master and fight the Holy Grail War until the very end. As a downside to this miracle, the general knowledge installed in him was lacking, his vocabulary is a bit unsufficient, and his body is not anything we could call robust. Nevertheless, it is predicted that through his future ascensions at Chaldea he will grow into being one who is suitable to be a guardian of humanity.[1]

In Fate/Requiem, Voyager is unable to enter spiritual form.[2] Makki theorizes that this is due to Erice's nature and the Dread Spirits inside her.

While next to nothing has been shown of his abilities, Voyager demonstrates one small fragment of his powers, where he managed to halt Nzambi's knife strike with just one small touch through his fingertip. When he does so, Nzambi tries to pull back, but she is unable to move her weapon, as if she is petrified from the touch. The weapon begins to crack and glow white-hot, before shattering in an explosion. Immediately after doing this Voyager collapses, the action having worn him out completely.[3]

In Fate/Grand Order he fights by conjuring cartoony stars in his first and second ascensions, or machinery related to space travel like a satellite dish and a moon buggy in his third ascension.