TYPE-MOON Wiki
Register
Don't have an account?
Sign In
Advertisement
in: Servants, Characters in Fate/Grand Order Arcade, Evils of Man,
and 15 more

Number of the Beast[2]

Nero Claudius manifested as a Beast:[3] the great Whore of Babylon from Saint John'sWP Book of RevelationWP.[4][5][1] Nega-Messiah, the greatest atrocity as viewed in Christianity.[1] At times called the Beast of Revelations,[5][1] who is in turn equated to SatanWP.[1]

The one who lays waste to the most prosperous yet depraved cities of an age. It is not divine retribution or anything of the sort. It is because of the Holy Grail she possesses that the "city" prospered from the shadows in the first place.[1]

What she feels is most "delicious" is the flesh of the fruit the moment before it rots. In other words, a city-state filled to the brim with human desire. When all desires able to be expressed by humans are contained within a single city, as in the case of Sodom and GomorrahWP, it will be offered up to her as the greatest dinner of all.[1]

With these traits in mind, her class was determined. Donning the temporary name of the great Whore of Babylon. Brought to life by mankind, she is the calamity who will find human history most satisfactory.[1]

Beast VI is an Evil of Humanity which manifests in civilizations which have reached the height of their prosperity and are now past their transitional period.[6] Her name is Beast VI/S. One of the seven Evils of Humanity, the Beast who embodies the sin of "Depravity" (堕落, daraku?).[1]

She is not the Beast VI who Arthur Pendragon is hunting. According to Arthur, when Beast VI/L and Beast VI/R are both present, Beasts VI/S and VI/G will manifest. Merlin sent Arthur into the world of Fate/Grand Order mobile to search for L and R, prompting S to appear in Arcade's world.[7]

In her adult state, Whore of Babylon bears the appearance of an older and voluptuous Nero, corrupted with red and purple eyes, wearing nothing but blood, a red loincloth, and a golden plate on her belly. Her hands have claw-like nails, and she has red-and-white wolf tail and ears. Her Holy Grail Aurea Poculum, full of a vile black substance, floats above her.

What she feels is most "delicious" is the flesh of the fruit the moment before it rots. In other words, a city-state filled to the brim with human desire. When all desires able to be expressed by humans are contained within a single city, as in the case of Sodom and Gomorrah, it will be offered up to her as the greatest dinner of all.[1] She savored the depravity of humanity with a sneering grin, laughing with satisfaction on occasion.[2]

After battling with her in Babylon, she admits that the main reason why she is here is because she got bored with the Demon Beast Incarnadines doing all of the fighting and wanted a chance to fight Chaldea herself, leaving with an open invitation to follow her into the Convergent Singularity where she will become an Adult Beast.[8]

Her belief is that the Beasts are weak in comparison to humans. If humans are to be exterminated it will be by their hand, which suits her just fine since she's more interested in devouring the Human Order right before it collapses.

She refers to Saber Nero as her "foolish self" and wants to tear off her uncle's head. She and the female Merlin are irreconcilable archenemies.[3]

Referred to by Ozymandias as the Great Beast (大いなる獣?), by Larva Tiamat as a "fellow calamity from the sea",[9] and by Noah as Sodom's Beast (ソドムズビースト?),[10] she is the origin of the Demonic Beasts that have been impersonating Goetia's Demon Gods. She is the enemy behind the events of Fate/Grand Order Arcade and created seven Singularities in imitation of Goetia. But unlike Goetia's incineration of humanity, she pursues the total vanishing of the Human Order. Her ultimate goal is to consume it as a meal.[7]

Differing from Fate/Grand Order, Goetia inside the body of Solomon does not appear, instead replaced by a shadowy figure that does not interact directly with Chaldea.

Draco was unable to reproduce the original Demon God that acted as the cornerstone of the singularity, so it was replaced by Demon God Allocer. The Allocer of the Singularity is eventually determined to be a Demonic Beast rather than a Demon God. Jacques de Molay utilizes the Holy Grail, which is filled with the Mud of the Beast (獣の泥?). Ozymandias laments that his manifestation in the Singularity is his second time being forced to be the slave of a Beast.

She goes by the false name "Draco". Nebuchadnezzar II.5 refers to her as his wife. The Counter Force summoned the Grand Rider, Noah, to face her. However, she injured Noah, leading to his temporary fusion with a certain Heroic Spirit in order to survive.[10]

She used the Holy Grail to send Nebuchadnezzar II's soul back in time to posses Gilgamesh's corpse, where "Gilgamesh II" then began to expand Babylon, turning it into a city of sin. Draco began feeding off the sin and amassing it in her chalice to become a fully fledged Beast. After manifesting she floods Babylon with a tidal wave.[10]

After battling Chaldea, Draco declares that she has only been playing so far and this is her larval state. She retreats, telling Chaldea that with her copies of the seven Singularities finished her path to Beasthood has been opened. She will be waiting for them in her final Singularity as a full-fledged Beast.[8]

Draco becomes a full-fledged Beast, revealing her True Name as the Whore of Babylon.[6][3][7]

She is ultimately defeated with the combined forces of Chaldea, Arthur Pendragon, Merlin, King Hassan as Grand Assassin, and Noah as Grand Rider.[7]

Once the Whore of Babylon became a full-fledged Beast, the quantity of her Magical Energy is considered immeasurable, and her Saint Graph is First Planetary-Class,[3][7] superior to Goetia, who was Second Planetary-Class, and therefore any other villain Chaldea had ever faced in Fate/Grand Order up to the Atlantic Lostbelt.[11] She claims that due to this, she is an existance far above the likes of Grand Assassin King Hassan, Grand Rider Noah, and Arthur Pendragon.[7]

Whore of Babylon describes the combined efforts of Grand Assassin King Hassan, Grand Caster-candidate Merlin, and Mash Kyrielight as an "ugly showing". When Grand Rider Noah interrupts them, he says he isn't much of a fighter, and that he brought Arthur Pendragon as a special fighting hand instead. With two Grand Heroic Spirits and the Knight of the Holy Sword, they are able to fight the Whore of Babylon. Thanks to Arthur releasing an unknown number of the Thirteen Seals of Excalibur Proto, Beast VI/S is defeated.[7]

She summons and controls the Demonic Beasts and was able to create replicas of Goetia's Singularities, which allowed her to pile up sins and stock them into her Holy Grail to use them as nutrients.[10] However, eventually the "wishes of the masses" will provide no nourishment to her. In order to mature into a full-fledged Beast, she linked various different worlds from parallel timelines with her Convergent Singularity; a graveyard of prosperities adorned by the rot of many Human Orders, the prophesied end of human history that the world is fated to reach due to humanity's self-ruination through seeking comfort and enjoyment. Using her imitations of Goetia's Singularities, she "deceives" Chaldea by using her Convergent Singularity to draw upon the wishes of the countless "Chaldeas" and the the Last Master, who defeated the First Beast Goetia, within her Holy Grail as nourishment to drink from. The wishes of the "saviours who brought salvation unto the world", the only "wish" that will suffice in growing her horns into a Mature Beast being "to save the world"; each battle Chaldea fought in the Singularities, the very act of competing for the Holy Grail, providing sustenance for her growth to Beast VI/S.[3]

Although she says this is a feat the other Beasts are incapable of achieving, she says it is little more than the main dish.[7]

Babalon Domus Aurea
Bewitching Queen Draco (妖妃ドラコー?) is Whore of Babylon's juvenile form as a Beast. By absorbing sins gathered through the seven Singularites she was able to become a full Beast.

In her infantile state, Draco bears the appearance of a younger Nero, corrupted with red eyes and draconic features. She wears three crowns on her head and shoulders and a few strips of fabric that barely qualify as clothing, and carries a golden, jewel-encrusted Holy Grail full of a vile black substance.

Despite being an infantile Beast, Draco possesses a ridiculous amount of Magical Energy and a third Planetary Class Saint Graph,[10] the same classification as Beast VII, and inferior to Goetia, who was second Planetary Class.[11] Although Beast VI is famed as the "The One that Devours Cities," her power surpassed "City" level, covering an entire continent.[10]

Draco was able to use her Holy Grail to create a gigantic gravity shift amidst the Indian OceanWP which in turn generated a tsunami of unprecedented size, the likes of which have never been recorded in Proper Human History. Enkidu claims not even Tiamat is capable of invoking something as big, saying it surpasses even the Sea of Life. It is a wave that signals the end and reset of the World. Noah was summoned in the Grand Rider class to suppress her Authority and exterminate her. While he held back the tsunami, Enkidu, Larva Tiamat, Mash Kyrielight, Lancelot, Sakata Kintoki, and Tamamo-no-Mae fought Draco. Draco mocked them for planning to take her down without the aid of a Grand Servant. Although they manage to lower her Magical Energy, the amount is negligible, and she's still considered to be in top condition. Although they seemingly repel her, Kintoki states they lacked a final push. Despite the conditions to strike her down having been met with the summoning of a Grand Servant, the Grand Servant in question had spent all his power suppressing the tsunami instead of fighting. Noah states that was because he had been severely injured by Draco right after being summoned, preventing him from fighting at full capacity later on.[10]

The Juvenile Beast VI/S reincarnated as an Alter Ego.

The Whore of Babylon was first mentioned in Fate/EXTRA, where Gawain called Nero by the name as an insult. She was mentioned again in BB's Profile in Fate/EXTRA CCC, in the description of Aurea Poculum.[4][5]

A Servant voiced by Sakura Tange named "Mother Harlot" was discovered in the Fate/Grand Order game files in a datamine in 2015. Summer Nero foreshadowed the Whore of Babylon with her Seven Crowns skill, the description of which states "Behold, the seven necks smoldering in the roaring sea. Earth’s amassers of fortune, it is time to pour your desire into the golden goblet."[12] 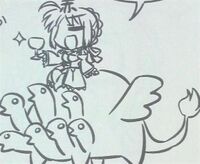 In Koha-Ace, Nero appears riding a seven-headed Beast and holding a cup in her hand as a reference to the Whore of Babylon.

Juvenile Whore of Babylon is illustrated by Arco Wada.

Adult Whore of Babylon is illustrated by Kotetsu Yamanaka.[13]