TYPE-MOON Wiki
Register
Don't have an account?
Sign In
Advertisement
in: Characters in Fate/Grand Order, Assassin-class Servants, Servants,
and 15 more

Ambushed from Ten Sides - As If There Was No Shadow
Anti-Unit[1]
A[1]→EX
Yan Qing (燕青, En sei?), also known as Assassin of Shinjuku (新宿のアサシン, Shinjuku no Asashin?), is an Assassin-class Servant summoned by Ritsuka Fujimaru in the Grand Orders of Fate/Grand Order.

Yan Qing was an outlaw who joined the Grand Assembly of the 108 Stars of Destiny during the latter half of Water Margin, one of the Four Great Classical Novels of Chinese literature. He was a short and handsome man with prodigious skill in both the martial arts and music, who entered the Great Assembly with his lord, Lu Junyi.[1]

Of course, Yan Qing was a fictional character, but he is still known as a founding master of the Yan Qing school of martial arts, even outside of Water Margin. While the martial art’s origin story is itself a fiction, this famed outlaw’s renown as the founder of a martial art has boosted his importance.[1]

A fictitious fine fellow who appears in the “Water Margin”. While he had been an orphan from the beginning, he was picked up and raised by the wealthy Lu Junyì.
It had seemed that Lu Junyi’s love towards him was out of ordinary, that a theory had said that Lu Junyi had love to Yan Qing no less than he had his wife.
Yan Qing, who had grown into a fairskinned and graceful young man of small stature, together entered the Liang Shan Bo, displaying great efforts no less than his lord.
The Liang Shan Bo before long became the representation of the loyalist army and went impoverished. Due to that, Yan Qing, afraid of being thrown away due to having served his purpose, encouraged Lu Junyi to escape together with him., but Li Junyi, who had been scheduled to receive an award, paid him no mind.
The weeping Yan Qing then escaped Liang Shan Bo alone, his whereabouts afterwards unknown.
In Water Margin, he was one of the few survivors. However, surely enough, none knew whether or not that is what he had wished for.

Through the machinations of Baal, Yan Qing has absorbed the abilities of the Phantom Doppelganger (ドッペルゲンガー?). 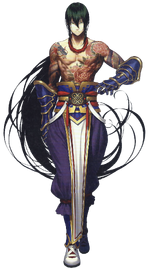 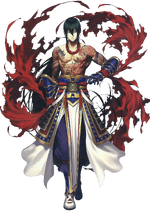 You, After the Rain (雨上がりの君?) in Fate/Grand Order, illustrated by TCB.

A bright and friendly figure.
Due to being a ruffian, he is rebellious against the powers that be; but in regards to the Master he would attend to him/her in complete sincerity.

However, should the Master be someone excessively violent in attitude, he would probably either go away or otherwise attempt to break and train them into a good lord.
He is fundamentally sincere, handling the Master like a teacher would.
Ever bright and proficient in artistic skills, should the Master request of it he would probably play an instrument and so forth.
However, his true nature is the outlaw who stretched all the way to Liang Shan Bo, a man who pursues freedom.

Yang Qing is a member of the Phantom Demon Alliance, fused with the Phantom Doppelganger. Before Chaldea's arrival, He killed Hassan of the Cursed Arm.[3]

In Barrel Tower, Baal informs his fellow Alliance members that Chaldea has sent Ritsuka into the Singularity. He hacked the Rayshift coordinates to make them fall, but it didn’t go so well. After Hessian Lobo leaves in a rage, Yan Qing asks Baal about his plan regarding the Alliance. If it was him, he’d kill Ritsuka before they can see it coming. Baal disappoints him by saying he’ll go third if Ritsuka survives the Phantom of the Opera and Hessian Lobo. He is unnerved by EMIYA Alter saying Phantoms are also brainwashing device. But even if he is brainwashed, he still honestly wants to kill Baal. After EMIYA Alter leaves, Baal admits to Yan Qing that he’s harder to deal with than the former. Yan Qing reconfirms that he honestly wants to kill him. Baal calls him simple yet bizarre that he can’t understand it, assuring him it’s a compliment.[4]

Disguised as Cursed Arm, Yan Qing arrives in Kabukicho after the Phantom and Christine have been killed. He stops EMIYA Alter from killing Ritsuka and James Moriarty, and convinces him to retreat. Afterwards, he returns with Ritsuka’s party back to their hideout.[5]

He reveals the Alliance’s objective is to destroy the planet, though Leonardo da Vinci finds that to be nonsense. He then “hears” someone skulking nearby, but Mash detected nothing. “Cursed Arm” however claims they concealed their presence, suspecting they’re an Assassin, and takes Ritsuka outside to look. There he removes his disguised and takes Ritsuka hostage, deciding it’d be more fun than killing them. Artoria Alter and Jeanne Alter arrive to stop him, but he dodges their attacks and escapes with Ritsuka. He repeatedly sends minions at the Alters to slow them long enough for him to escape. Artoria Alter soon exhausts herself after using Excalibur Morgan to destroy King Lear. Yan Qing takes this chance to escape with the now unconscious Ritsuka.[6]

He takes them to Barrel Tower, and once they wake up, he introduces them to Baal, the “Evil“ Moriarty. Baal offers to return them to Chaldea in exchange for Chaldea not interfering with him. They refuse, but he leaves to give them time to reconsider. Yan Qing then introduces Ritsuka to the imprisoned William Shakespeare, confirming he tortured the writer for a day until he agreed to created King Lears just recently. He decides to torture him more painfully next time, and requests he make Macbeth.[7]

Yan Qing later hosts a party for Shinjuku’s wealthy, appearing before them disguised as Artoria Alter guarded by Hornets. He commends them for financing the Alliance and leaves them to celebrate after a couple patrons thank him and the Hornets for removing such dangers as the Coloraturas. A Hornet asks him what he wants to do with the money they collected. Yan Qing says to use some to buy more food and drink, and use the rest to set up a store in Kabukicho. He also orders the Hornets to ensure people will never consider defying the Alliance. He then prepares to leave when a Hornet suggests they take a couple women with them. Yan Qing agrees and looks around when he notices Artoria Alter. Killing the Hornet who let her in, he orders more Hornets to be called in to kill Artoria Alter. He also orders them to make up some excuse to kick the sponsors out. Ritsuka’s party kills the Hornets, so Yan Qing sends in reinforcements, including Romeo and Juliet once he confirms the sponsors left. After Romeo and Juliet is destroyed, he joins the Hornets, disguised as one of them. Ritsuka shocks however him into revealing himself when they remove their disguise as part of Moriarty’s plan. Yan Qin reveals his True Name, and fights the group. Sensing that he’s going to lose, he activates a bomb under the building to collapse it, prompting the group to escape.[3]

He emerges from the rubble disguised as a civilian, along with a thug and a Hornet. Moriarty fatally shoots him after deducing with Sherlock Holmes which one he was. Confessing he has the memories of every person he changes into, Yan Qing wonders if he should’ve killed his lord so he could’ve died without being betrayed, with his heart still full of pride. He then disappears, asking what happened to his pride.[3]

He is a user of Zhong Guo Quan Fa, following Li Shuwen. In the case of being summoned in another class, he would also uses crossbow and so forth.

Prior to the arrival of Chaldea at the Shinjuku Singularity, he defeated and killed Hassan of the Cursed Arm.

Yan Qing's Noble Phantasm is Ambushed from Ten Sides - As If There Was No Shadow.[1][2]

Shimaudon is the character designer for Yan Qing.[1]